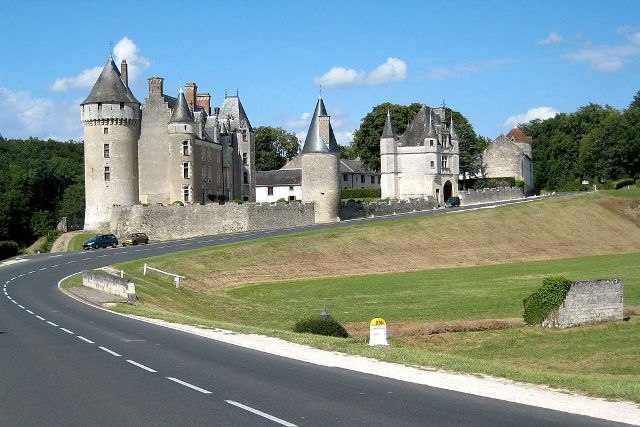 Location: Céré-la-Ronde, in the Indre-et-Loire departement of France (Centre Region).
Built: --
Condition: In good condition.
Ownership / Access: Privately owned.
ISMH Reference Number: PA00097620
Notes: Château de Montpoupon is in Indre-et-Loire, east of Tours, 10 km south of Montrichard and a few km from Chateau de Chenonceau on the road to Loches, in a valley in the heart of a forest. It depends on the town of Cere-la-Ronde. It is the subject of a classification as historical monuments since January 1966.In the Carolingian period the corner, a Germanic clan, chose to settle on the rock that takes the name of "Mons Poppo" which is subsequently Latinized into "Mons Popeo" then "Mont infant" and finally Montpoupon. In the Middle Ages, the castle was a strategic stronghold because it is halfway between Loches (then in the hands of Fulk Nerra) and Montrichard (owned by his nemesis: Eudes, Count of Blois). In the late Middle Ages (fourteenth century) Montpoupon passed to the Lords of Requests and Buzançais that reconstruct the in 1460 because since the Hundred Years War had been neglected: they transform into a stylish residence Renaissance building in 1500 and the entrance postern. With the Montpoupon Requests may reside closer to the Court that travels at that time between royal castles of Touraine. Their loyalty to the Valois allows them access to large loads: Grand Panetier, Great Cooks, Grand Master of the Archers. The family succeeds Montpoupon until the middle of the seventeenth century and is transmitted by women: Louise de Prie, Duchess of Motte Houdancourt will governess of the Children of France and Louis XIV holds in high esteem. At that time the buildings are decaying because these ladies prefer the Court (now at Versailles) are very little in Touraine. In 1763 the castle was sold to the Marquis de Tristan (father of the future mayor of Orleans) who wants to make a farm. Finally he falls in love the place and restores the castle, giving it some of its former glory. The Revolution marked a halt to his plans (only the chapel will be destroyed). In 1840, Mr. de Farville, its new owner, built the common as they exist today. In 1857 Jean-Baptiste of Saint Pierre Motte bought the castle. The family began outside work (late nineteenth century) and interior (1920) to return it to the Renaissance appearance it has today. In 1973, the great-granddaughter of John Baptist de la Motte St. Pierre, Solange de la Motte St. Pierre, opened the castle to visit, mainly on kitchen and common vénerie which displays objects. But it was in 1995, with the assistance of his nephew, Amaury Louvencourt these common, ancient heart of the equestrian and hunting activity Montpoupon, house a museum on the horse and hunting and become one of the three French museums venery). The Montpoupon castle and its outbuildings were registered historic building on 1 May 1930 and then some, facades and roofs of the gatehouse and tower known as the Dungeon were ranked 28 January 1966.

How To Get To Château de Montpoupon (Map):