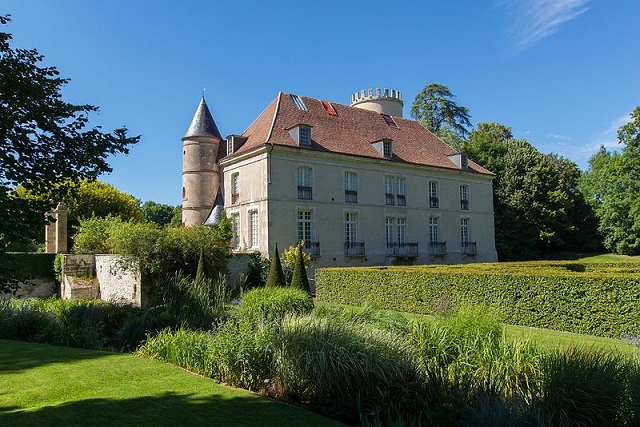 Location: Jalognes, in the Eure-et-Loir departement of France (Centre Region).
Built: 12th century.
Condition: In good condition.
Ownership / Access: --.
Notes: The castle of Pesselières is on the lands of the seigniory of Pesselières in the parish of Jalognes and part that of Groises in the department of Cher. This land consists of a strong and ancient castle, in high, medium and low justice, several estangs and estates. She is ten leagues from Bourges and three from Sancerre. The justice and seigniory of Pesselières are fiefs moving of the County of Sancerre. Justice came to the bailliage of Sancerre.The lords and barons of Pesselières have always been recognized as marshals of the County of Sancerre. In this capacity they had the right to conduct all the vassals and rear-vassals summoned to attend the first entrance of the Count de Sancerre into his city, and also the very lucrative right to appropriate the horse which the count had mounted at his entrance , As well as all the dishes that were used that day at the county court. This very strange right gave rise to many difficulties, and the Counts regularly transacted by yielding land to the lords of Pesselieres. In 1170, mention is made for the first time of the seigniory of Pesselières, possession of the family of Livron. In 1228, Pierre de Livron (1209-1257), a knight, lord of Pesselières en Berry, left for Compostelle with a whole group, doubtless behind the Comte de Sancerre. His departure is known by a donation made at that time received by the abbey of Notre-Dame de Lorroy in Berry: "To all those who will control the present letters, Archpriest of Sancerre, addresses his salvation in the Lord, Know that the lord Peter of Livron, a knight, one of those who go to Saint-Jacques, to increase the alms of his chapel of Pesselieres, or a priory founded in the same year, depending on the abbey of Saint-Satur.

How To Get To Château de Pesselières (Map):