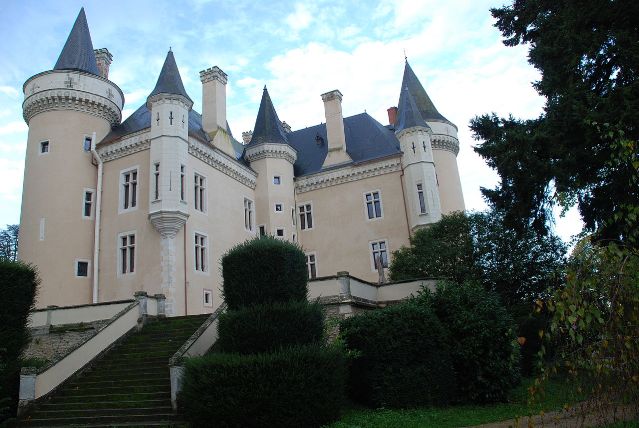 Location: Saint-Chartier, in the Indre departement of France (Centre Region).
Built: 15th century.
Condition: In good condition.
Ownership / Access: Private property.
ISMH Reference Number: PA00097449
Notes: Château de Saint-Chartier is located in the French town of Saint-Chartier in the department of Indre and region Centre-Val de Loire. Fortress composed of a dungeon originally flanked by four corner towers with a courtyard. In the park remains an arched gallery of the thirteenth century. George Sand is located his novel The Masters ringers. The castle has hosted for 32 years the St. Chartier Festival, called international meetings of luthiers and masters ringers, until 2008. Following the change of ownership, the festival moved to the castle of Ars and restoration Castle was begun.The castle is classified a historical monument (walls, curtains, common, Jeu de Paume, fireplace) and registered (the castle Main building), both of 14 February 1989. It dates from the early twelfth century, with transformations in the Renaissance and again in the nineteenth century.twelfth centuryThe castle is mentioned the first time in 1102, by reference to a visit of the Archbishop of Bourges Léodegaire to Adelardus Villebaldus (also called Adalard), which calls itself lord of Saint-Chartier. It's vassal lords of Deols. At the end of the twelfth century, the last of Raouls is Denise Deols and Chateauroux (1173-1207). She was widowed at sixteen; King Richard the Lion Heart gives in marriage to André de Chauvigny, faithful kings of England in 1189 and brought him in dowry Deols, Saint-Chartier, La Châtre, Le Châtelet, Chateauroux, etc. For centuries, Saint-Chartier is in the hands of Chauvigny fourteenth and fifteenth centuries The Chauvigny, rebuild the tower of the fourteenth century and the house in the fifteenth century. They also build, in the thirteenth century, a gallery called "real tennis".16th century The castle has undergone some changes over time of Louis XVI for the use of stables.19th century Count Jacques Aimé Marie Constant Moreton Chabrillan, Napoleon's chamberlain, becomes the owner of the castle. The castle is poorly maintained, and during the period of the Restoration, many parts of the castle are ruined.In 1858, Alexander I Naud, draper, bought the Castle. He lives there with his wife Clouard Victory and two children, Alexander II and Victorine. Alexander I built between 1864 and 1865 Barbault Chapel in the castle park, like funeral chapel for his family. The castle was restored in 1873-1880 by Victorine his daughter and her husband Michel Germain, assisted by Monsignor Trioche3, and departmental architect Alfred Dauvergne.twentieth and twenty-first centuries Victim of a fire front in the first half of the twentieth century. Its current owner started the restoration in 2009.

How To Get To Château de Saint-Chartier (Map):