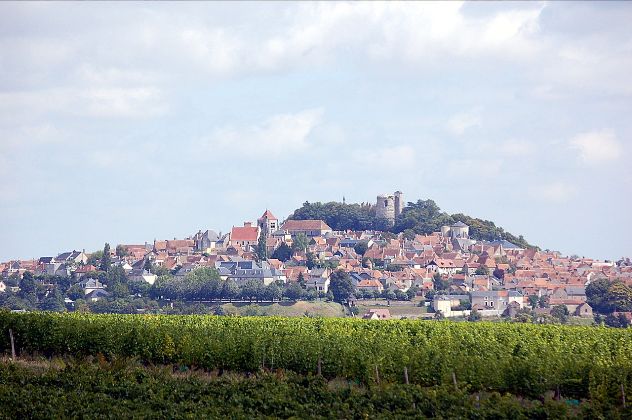 Location: Sancerre, in the Cher departement of France (Centre Region).
Built: --
Condition: In good condition.
Ownership / Access: Privately owned.
Notes: Château de Sancerre was one of the strongest medieval castles built in France. It was the seat of the counts of Sancerre whose family members were Grand Officers of the kingdom of France: as Louis de Sancerre, Constable of France. The future Charles VII and Joan of Arc stayed at the Chateau de Sancerre, then strategic position on the border of the "Kingdom of Bourges." The town of Sancerre was formerly fortified. It was built under the castle, closing access to the less steep slope of the mountain. Built on top of an isolated mountain hills of Sancerre, it remains the old tower, the Tower of the Fiefs. Indeed, the castle and the city walls were demolished in 1621. There are few traces of its fortifications only foundations, cellars or parts of walls. The location of the castle is now occupied by a mansion (1874) by Louis XII style and a private park, properties of the Marnier Lapostolle Company.

How To Get To Château de Sancerre (Map):