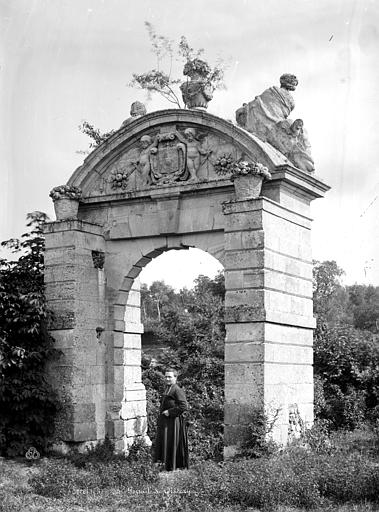 Location: Sorel-Moussel, in the Eure-et-Loir departement of France (Centre Region).
Built: 10th century.
Condition: Ruines.
Ownership / Access: --.
Notes: The castle of Sorel was preceded by a motte of the tenth century built to fight against the Viking raids. Located on the promontory of Sorel dominating the Eure in right bank downstream of Dreux and which offered protection against these attacks, it belonged then in fief to the lords of Thymerais (Châteauneuf-en-Thymerais).The mound was gradually transformed into a fortress with the addition of a keep and ramparts built of stone, and became the property of Gervais († ca 1116), great seneschal of France under Philip I. In the thirteenth century, Philippe de Dreux, bishop-count of Beauvais, destroyed the fortress which was subsequently rebuilt by his nephew. In the fourteenth century the fortress passed into the hands of Peter II of Alençon (1340 - 1404), then of the Laval family, and during the fifteenth century to the family of Albret. Under Louis XI it was a key element in the defense of the Ile-de-France against the attacks of the English. In the sixteenth century, the castle, now a pleasure residence, passed to Pierre Séguier (1504-1580), founder of the Séguier family, one of the most powerful families of robes of the Ancien Régime. The son of Pierre Seguier inherited it; But having passed through the camp of Henry of Navarre, Protestant and future Henry IV., The Catholic League destroyed the castle. His heir made the castle rebuild in the seventeenth century, in its present form; The strongly noticed portal is built by the next generation.During the 17th-17th century, the residence passed to the Duke of Luynes, to the Dyel family of the Parquet, to the financier Antoine Crozat (1655-1738), to Louis-Charles de Bourbon prince of Anet and count of Dreux, to Princess Anne Of Conde, to the Duchess of Maine, to the Prince Dom, and to the Comte d'Eu, and then Duke of Penthievre (1725-1793). But these centuries saw the decline of the castle in favor of the castle of Anet which had belonged to Diane de Poitiers, mistress of Henry II. There is even talk of delivering the castle to the dealers of stone and other materials - which ends up happening with the Revolution. Louise-Marie-Adélaïde de Bourbon (1753 - 1821), daughter of the Duke of Penthièvre, returned from exile when Napoleon fell and redeemed the ruins in 1820. His son King Louis-Philippe inherited it but the fall of the monarchy of July brought about the confiscation of the property of the family of Orléans in 18489. What remains of the castle (the hunting lodge of the eighteenth century and the portal) is classified historical monument in 1862 and is thus preserved from a complete disappearance. In 1872 the property passed to the family of Orléans, which in fact restored a part to the identical. However, very damaged during the two previous wars the "Old Castle" is no longer inhabited; And the rescued pavilion was vandalized and left behind for bad weather and vegetation. In 1952 the Comte de Bazelaire de Ruppierre, architect of the "Comte de Paris" buildings, acquired from the latter the property, overrun with debris and vegetation, for the price of cutting some trees in the park. He carried out important rehabilitation works, including the dry moat of the "Pavillon des Oiseaux" and the restoration of the park. The current owner (2016) is his grandson.

How To Get To Château de Sorel (Map):