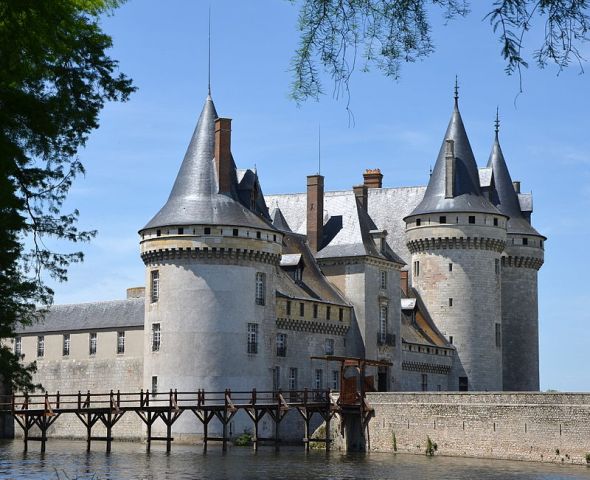 Location: Sully-sur-Loire, in the Loiret departement of France (Centre Region).
Built: 14th century.
Condition: In good condition.
Ownership / Access: Owned by the department.
ISMH Reference Number: PA00099024
Notes: Château de Sully-sur-Loire is a French chateau located in the Loire River, in the town of Sully-sur-Loire, the Loiret and the region Centre-Val de Loire.The monument receives about 55,000 visitors a year and is the fourth most visited site in the Loiret.The castle was first mentioned in 1102, it controlled a bridge over the Loire, which disappeared in the fourteenth century. He has belonged to the centuries that three families: Sully the first lords of the family of Trémouille, and family Béthune. In 1218, Philippe Auguste built a great tower. In 1396, Gui VI Trémoille launches construction of the present castle, Raymond du Temple (architect of the King and the Duke of Orleans) draws up the plans. In 1524, a building is added to the southeast of the building. George I of Trémoille, born in 1384 and died May 6, 1446 at the Château de Sully-sur-Loire, was Count of Guînes from 1398 to 1446, Count of Boulogne and Auvergne, Count and Baron lord of Sully, Craon and Trémoille, Saint-Hermine, Isle-Bouchard, grand chamberlain of France (1428). It is acquired in 1602 by Maximilien de Bethune, the great Sully, first duke's name. Between 1602 and 1607, it transformed the castle to its use, also building a park. The young Louis XIV takes refuge in the castle in March 1652 during the Fronde princes. In 1715, the castle welcomes Voltaire fleeing Paris. In the middle of the eighteenth century, the building was built north of the inlet body. The castle suffered a fire in 1918 and the bombing of June 1940 and August 1944 during World War II. When a security sales in 1942, the State bore acquired three tapestries of Flanders or Paris of the early seventeenth century, which are preserved in the former Hotel de Bethune-Sully in Paris, current seat of the Centre National monuments. The castle remained in the family of the 1st Duke of Sully until 1962, when the General Council of Loiret acquires and restores.

How To Get To Sully-sur-Loire (Map):