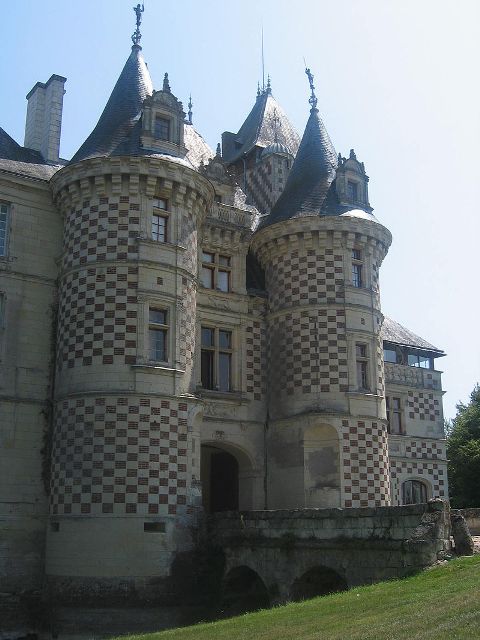 Location: Chouzé-sur-Loire, in the Indre-et-Loire departement of France (Centre Region).
Built: 16th century.
Condition: In good condition.
Ownership / Access: Privately owned.
ISMH Reference Number: PA00097691
Notes: Château des Réaux is a medieval castle located in the town of Chouzé-sur-Loire, in Indre-et-Loire department in central France. It was admitted to the list of historical monuments from 1930.The Château des Réaux belonged in the sixteenth century, to Amaury Peau, then Jeanne de Montejean, Countess of Sancerre, Antoine de Breuil and from 1455 Gilles de Brye. After going to ruin in the fifteenth century, it was purchased by Jean Briçonnet, first mayor of Tours. The ancient medieval fortress remained only the general building installation: an island surrounded on all sides by a large ditch full of water that had to ensure safety. The present castle was built on the site of the old castle by Jean Briçonnet, son of William Briçonnet, lord of the region then appointed Plessis-Rideau. The castle was also inhabited by Thibaut de Longuejoue and his descendants, the Taveau family. A marriage in 1595 resulted in the castle in possession of the family The Béraudière. François de La Béraudière, after having inherited, in 1650 sold it to the tune of one hundred and fifteen thousand lire to the writer and poet Gédéon Tallemant des Reaux, and the July 30, 1653, the castle bears his name for real concession.

How To Get To Château des Réaux (Map):