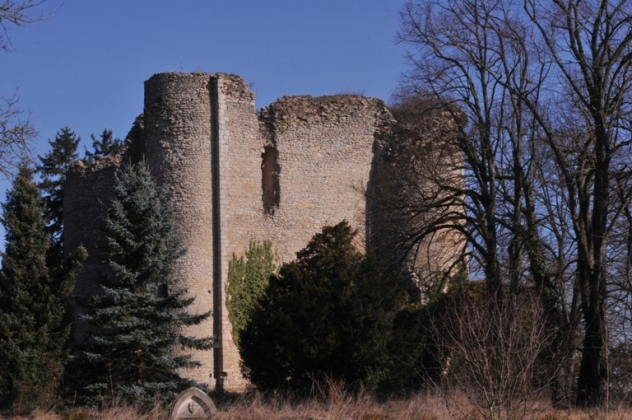 Location: Sancoins, in the Cher departement of France (Centre Region).
Built: 14th century.
Condition: In good condition.
Ownership / Access: --
Notes: Donjon de Jouy is a monument of the ancient town of Jouy, now part of the city of Sancoins in the Cher department.The ancient Donjon de Jouy, l'Aubois dominates the valley and the lake of Javoulet. It was probably built on the site of a Roman camp, as evidenced by the still visible remains of the paving of a Roman road. According Comments on the Gallic Wars (58-52 avJC), Julius Caesar after the siege of Avaricum (Bourges) held its twelfth legion with this strategic region who commanded the Roman road branching off Tincontium (Sancoins) to a Avaricum both Auvergne other. In the sixth century to 620? St. Columba, an Irish monk came to evangelize Gaul after the disturbances caused by the barbarian invasions, gave the task to one of his disciples nicknamed Theodulf Bobolein and Saint Chalan create a monastery in Jouy on Aubois on the site of the Roman fort . (In 620 was also built by Bobolein Abbey Bellavaux in Charenton-du-Cher). The trenches of the former Roman camp were used for the construction of the monastery which stood on a smaller enclosure than the camp itself and included cells, a well, a church, a cemetery and at the north end a square tower was certainly leveled to build the dungeon. This monastery was destroyed between the eighth and ninth centuries when new invasions by the Hungarians.In 1191 the fort was turned into a powerful dungeon by Pierre de Courtenay, grand-son of Louis VI and Latin emperor of Constantinople. The new enhanced fortress three corner towers, an original height of 27 meters, served by a stone spiral staircase, reflecting the traditional architecture of this style. Whole dungeon was provided on the ground floor of a first vaulted room, certainly with the jail below the dungeon, the first floor a large room whose walls were painted with frescoes served the lords of apartments, a chapel on the second floor corresponded directly with stately apartments, finally there were the senior small rooms floors with tall windows and a fireplace, culminating in the attic storey with the walkway adorned with turrets, girded battlements, machicolations and conical roofs. The fortress dominated the four cardinal points. To the west it overlooked the Aube valley and the royal city of Sancoins, further north we could see two mills and the hills bordering the Loire, beyond the wooded hills of the Morvan, southeast Bourbonnais, Mont d'Or and the Puy de Dome and opposite the pond Javoulet.

How To Get To Donjon de Jouy (Map):