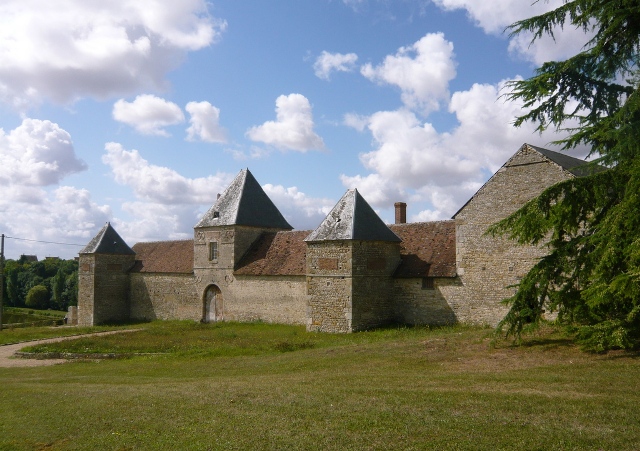 Location: Bondaroy, in the Loiret departement of France (Centre Region).
Built: 14th century.
Condition: In good condition.
Ownership / Access: --
Notes: Manoir de la Taille a fortified manor english1, built from the fourteenth to the sixteenth century and located Bondaroy, in the department of Loiret and the region Centre-Val de Loire. His appearance has varied over time, and it remains today a tower of the thirteenth century, the western façade and sixteenth-century buildings, and a set of buildings and barns of the late nineteenth and early xxe.The old as new construction had primary role of protecting crops pillards.The field and fortress were originally included in the French royal domain. They are given in 1308 to John of the Size (? -1314), While large verderer of France by King Philip the Be. The fortress was destroyed during the Hundred Years War by the British. The Size of Martin (1408-1488), lord of the reign of Louis Xi and companion of Joan of Arc at the siege of Orleans in 1428, inherited the estate and rebuilt a new castle on the ruins to 1450. this consists of an enclosure, round towers, a fortified entrance gate and a main building at the center. Étienne the size inherited the castle to the death of Martin. Thereafter, he left the family's size in succession belonging to William de Mornay (1483), L'Huillier (1497), Simon de Mornay (1502) He returned to the bosom of the size in 1553 with Louis of Taille. In the sixteenth century, the poet and playwright Jean de La Size (1533-1608) Note, heir Louis4, is raising the gatehouse by way of constructing a workpiece. He also construct buildings that flank it, and the square defense towers that frame the ensembleNote. During the wars of religion, the manor is a refuge and place of worship protestant. In 1617, The Size of Lancelot's son Jean, sold the family estate of Jacques Guéribaldès. Among the successors include fish, squire of King 1715, and the family of the Hamel (Lord Denainvilliers), including Angelique Hamel, lady Bondaroy (1705-1760) followed by Fougeroux family Blaveau 1730 whose botanist Auguste Denis Fougeroux Bondaroy (1732-1789). Finally, in 1890, it was acquired by the family of Hamel Fougeroux. In the nineteenth century, a fire destroyed the central building, leaving only the walls and the west facade including gatehouse, buildings and framing square towers. The manor is then converted to farm, with the addition of several buildings and barns around its perimeter. It deteriorates to the point that at the beginning of the twentieth century, it is already almost abandoned, and heads the ruine. In 1977, Orlando's The Size, entrepreneur and distant descendant of Martin's The Size, bought the castle in the descendants of Angelica From Hamel7, request its inclusion in the inventory of historical monuments, and partiellement7 renovates. The facades and roofs are recorded February 4 1974.