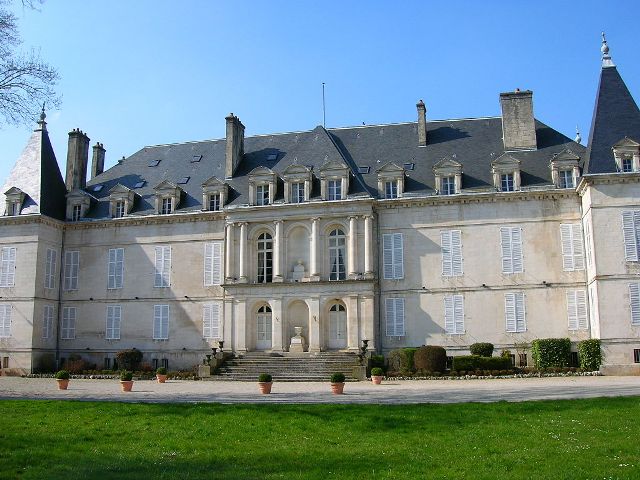 Location: Arc-en-Barrois, in the Haute-Marne departement of France (Champagne-Ardenne Region).
Built: 1845.
Condition: In good condition.
Ownership / Access: --
Notes: Château d'Arc-en-Barrois is located in the municipality of Arc-en-Barrois in the Haute-Marne, 24 km from Chaumont (prefecture of Haute-Marne) and 15km from the exit of the A5 ( Chaumont-Semoutiers output).Isabelle de Dreux, who died in 1239, Dame Arc-en Barrois married Hugh, born about 1125, died in 1199, Lord of Broyes Simon Chateauvillain, who died in 1305, Lord of Arc-en-Barrois married Marie de Dampierre, died in 1297Jean de Châteauvillain, died in 1313, Lord of Arc-en-Barrois married Jeanne de Semur, born about 1245, Lady of Semur-en-Brionnais.The present castle was built on the site of a castle destroyed during the Revolution in 1793. The area of Arc-en-Barrois in 1622 belonged to Nicolas de L'Hospital, Duke of Vitry, it was bought in 1679 his son by Count Morstein who ceded in 1693 to Louis-Alexandre de Bourbon, Count of Toulouse. His son Louis Jean Marie de Bourbon, Duke of Penthièvre inherited the estate.Past the horrors of the Revolution, the area was restored in 1814 to the daughter of the Duke of Penthièvre, Marie-Adelaide de Bourbon, who married in 1769 Louis Philippe, Duke of Orleans. The couple's daughter, Adelaide of Orleans (Louis-Philippe I's sister), inherited it and rebuilt the present castle on the site of the former. She and bequeathed by will to his godson Prince de Joinville. In 1900, his son Pierre, Duke of Penthièvre inherits. He lives in the castle that provides the wounded from the front Verdun and Argonne during the First World War. He died unmarried in 1919. The castle of Arc en Barrois and lands then return to his nephew Jean d'Orléans, Duke of Guise. In 1940, upon the death of the Duke of Guise, Arc en Barrois is divided among his four children: Isabella, Countess Bruno d'Harcourt, Françoise Christophe princess of Greece, Anne, Duchess of Aosta and Henri, Count of Paris. The state bought the property in 1971 and separated the forest and the castle grounds. From the mid 1970s until 2006, the castle was used as a hotel and the owners French, Japanese and Dutch. In 2010, the castle was transformed into private holiday home by a Danish company.

How To Get To Château d'Arc-en-Barrois (Map):