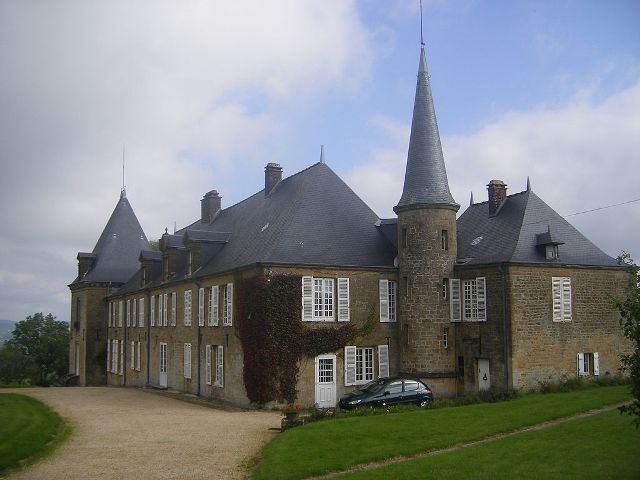 Location: Remilly-les-Pothées, in the Ardennes departement of France (Champagne-Ardenne Region).
Built: 16th century.
Condition: In good condition.
Ownership / Access: Private property.
Notes: Château d'Hardoncelle is a stronghold of the sixteenth century located in the French town of Remilly-les-Pothées in the Ardennes. It is located along the D9, in the hamlet of Hardoncelle, east of the town of Remilly-les-Pothées. This hamlet is located high and the castle can monitor the Sormonne Valley and one of the access roads to Mezieres. The writer Charles Gailly Taurines dreamed of in place of the Four Aymon son. And General Roger Noiret moved there, having ended his military career, to undertake a political career in the Ardennes, but also devote himself to painting.Hardoncelle Castle was built in the sixteenth century in place of a previous building destroyed by Liégeois. At the option of marriage alliances and inheritances, this family castle family pass: the Argy, the Villelongue, the La Salle, the Pétré the Samboeuf the Voyart1. In 1777, Louis-Polycarpe Voyart, inspector general provisions of the Champagne and Hainault, gives this property to Louis-Antoine de Beffroy which already had the castle of La Greve, in the neighboring commune of Saint-Marcel. During the Revolution, several members of the family emigrated Beffroy, including Louis Antoine de Beffroy who joined the Army of Conde. Local people destroy the castle of the strike but to preserve the Hardoncelle. Several other family members remain in France and fought in the armies of the Republic and the Empire. This is the case for example of Antoine Ferdinand belfry tower Castle Hardoncelle born in 1787, nephew of Louis Antoine de Beffroy too young at the time of the Revolution but who engages in the imperial troops. 16 Nivose Year II (5 January 1794), in the Terror, the district conducts an inventory of the estate, without resulting in other effects, since the family belfry tower remains owner. On the death of John the Baptist belfry tower in 1892, Gustave Gailly, industrial and Senator of the Ardennes, acquires the property and installed his family. His son, writer Charles Gailly of Taurines, writes many of his works, the most famous, the legend of the Four Aymon son, and the Mystery of the Passion. Following the outbreak of the Second World War, the family Gailly Taurines leaves the field to Paris, carefully closing the shutters of the castle, and padlocking the gate. During the German occupation, the castle was requisitioned by the Wirtschaftsoberleitung2 quickly, and a German vineyard manager settles. In 1944, he takes to turn their heels during the liberation of France by Allied troops, without taking himself, time to close the doors and shutters, but however taking the best furniture of château3. The castle remained uninhabited until 1952, when it was bought by General Roger Noiret. This building is a private property and can not be visited.