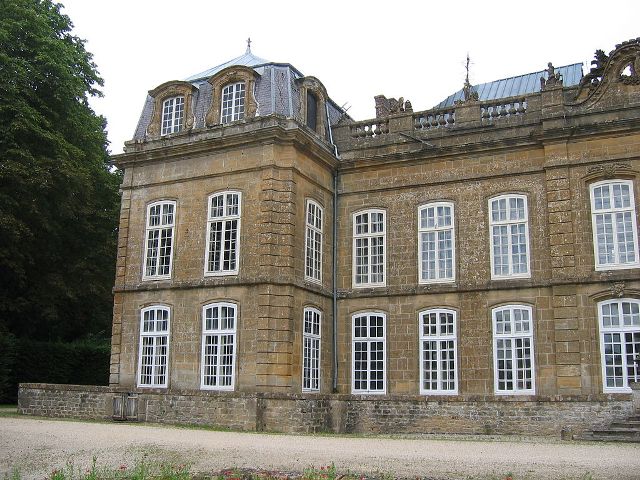 Location: Bazeilles, in the Haute-Marne departement of France (Champagne-Ardenne Region).
Built: 16th century.
Condition: In good condition.
Ownership / Access: Privately owned.
ISMH Reference Number: PA00078340
Notes: Château de Bazeilles (or Château d'Orival) is a castle located in Bazeilles, in France. It is a building of Louis XIV style.The building includes a main body flanked by two projecting wings, with curved corners. The front side park Louis XIV3 style is crowned by a triangular pediment sculpted female figures. The floor has a large balcony on the central portico, and macaroons heads located above the windows. The front facade has a pediment carved into a rock asymmetrical cartridge. Masks adorn the windows key. In the park, an orangery is marked by a neoclassical style. The layout of its façade is convex. It is capped with a slate roof, conforming the same curve and whose apex is rounded. Large windows successive alternating with windows topped by an oculus. The entrance gates are also classified. The park is fenced and has water features.This castle was built by Louis Labauche (1698-1780), textile manufacturer. March 30, 1741 Louis Labauche sees the royal privilege granted to establish a factory in Sedan for the manufacture of all kinds of cloth. This privilege dedicates his zeal and talent in the service of the textile industry in the city. Having acquired ownership of Bazeilles, he built this castle and includes a foulerie this site near the castle. It also attempts to install poles napping and tables to mow the sheets. But it causes a "clocque" a strike shearers. They do not want to be "village workers", while they practiced their craft on Sedan earlier. In 1750 he is head of entrepreneurs facing a new strike shearers refusing the evolution of the regulation. It is this time there shearers who must yield. Louis Labauche was knighted in April 1769. He becomes squire, plus the title Lord of engagist Bazeilles4. The castle has sometimes been attributed to the architect Emmanuel Héré, and guards with Jean Lamour. These allocations are not bolstered by any concret element, and, according to Jean-Lucien Guenoun, "hardiness processing keys carved bays refers to less famous artisans'. The building is classified as historical monuments in 1943. He suffered a major fire in 1989.

How To Get To Château de Bazeilles (Map):