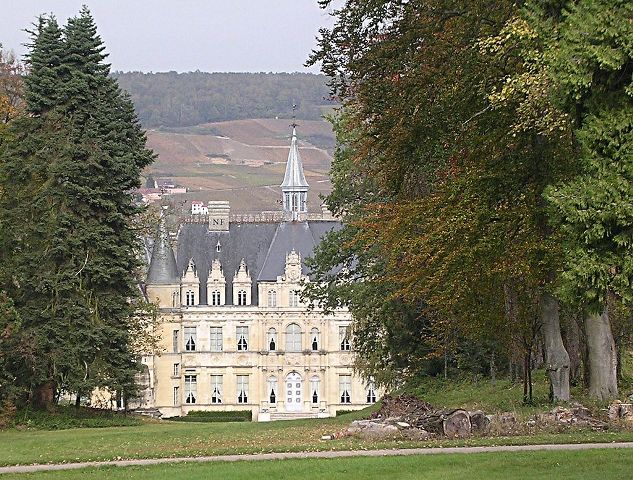 Location: Boursault, in the Marne departement of France (Champagne-Ardenne Region).
Built: 1842.
Condition: In good condition.
Ownership / Access: --
Notes: Château de Boursault is a French Renaissance-style castle located in the town of Boursault, near Epernay, in the department of Marne and the region Alsace-Lorraine-Champagne-Ardenne. It was built between 1842 and 1848 for the famous Veuve Clicquot, owner of the eponymous Champagne house.Under the French Revolution, Count Louis de Chevigne and his wife, née Marie Henriette of Chaffaut are killed one by fighting alongside Charette during the War in the Vendée and the other in the prison of Nantes. Their son Louis Marie Joseph Chevigne (1793-1876) was adopted by his uncle, General Count of Chaffaut, who installs it in the little land he owns in Boursault Champagne.The manor of Boursault is then only a modest house next to the ruins of an ancient fortress, which once belonged to the family of Anglure.When Count Louis de Chevigne wife September 13, 1817 the only daughter of Veuve Clicquot, Clementine Clicquot Ponsardin (1799-1863), her rich stepmother allocates some funds to restore the castle.But it was only after the marriage of his granddaughter, Marie-Clémentine Chevigne (1818-1877) with Louis de Rochechouart-Mortemart (1809-1873), Count of Mortemart in 1839 that the decision was taken to remake the entirely new castle. A new castle, Renaissance style, was built between 1842 and 1848 by architect Jean Jacques Nicolas Arveuf-Fransquin (1802-1876), who at the time worked for the restoration of the Cathedral of Reims. The first stone was laid August 15, 1842, in the presence of a picket of local National Guards, by the young Paul Mortemart, in his father's arms. Five years later, the castle was completed. A landscaped park of eleven hectares is drawn by the architect. On the facade, facing the pool, a sealed plate above the pediment of the central window is labeled NATIS MATER (a mother to her children) recalling the gift of the home by the owner of the place to his daughter and his little girl."The ground floor, writing a journalist of the time, can compete of magnificence and taste with what the art of the sixteenth century has produced more coarse (sic) on the banks of the Loire: the dining room is decorated with modern tapestries and richly carved woodwork; in a monumental fireplace made of Burgundy stone, etc. "1 Boursault became one of the most magnificent places in the region. The count of Chevigne it gives parties and dinners to press the right champenoise society, people of the world, writers, artists, around one Prosper Mérimée called "the queen of Reims." "The butler Bartholomew ensures proper order of all, reigning with authority on this little kingdom, which is common to the stables, through the kitchens, cellars and the forge. In greenhouses grow pineapples, meanwhile the orchids that in a few years, the Earl of Mortemart will bloom with science. "Wine is me", likes to say, paraphrasing Louis XIV, Madame Clicquot. His table receives only champagne which intoxicates the strongest heads. "

How To Get To Château de Boursault (Map):