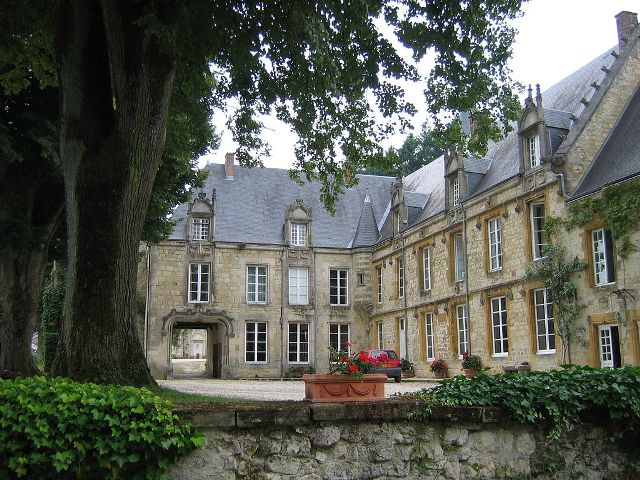 Location: Cornay, in the Ardennes departement of France (Champagne-Ardenne Region).
Built: 16th- 20th century.
Condition: In good condition.
Ownership / Access: Privately owned.
ISMH Reference Number: PA00078551
Notes: Château de Cornay is a mansion in Gournay, in Ardennes (France), on the frontiers of Champagne and Lorraine.This castle, located on a hillside terrace, owned since its construction, there are four centuries in the same family. A family united by the profession of arms in that country Argonne Ardennes and the French nation. But the castle is not military. It's a pleasure house, the seventeenth century, dramatically transformed in the nineteenth and early twentieth century, preserving its Renaissance style."Manoir ideal for summer holidays, shot by its main facade cool east wind, lying in the shadow of the fortified church, protected promiscuity and noise by a grove to mountain laces, Castle Cornay is a friendly and well proportioned dwelling " - Suzanne Briet As a nod to the visitors, the building also recalls some details both activities the town of Cornay in the nineteenth century stone carving and viticulture.Today the castle is made of a completed residential wings south of a wing bracket with cart door. A square tower punctuates each end, with walls higher than those of the body of the house, with hipped roof and pediment dormers. A small flag is placed in the outer corner of the two buildings at right angles, with a door topped by a box cartridge of a rock band in a pediment in the round molding. The house is built in rubble gaize extracted from a nearby quarry. On this stone is juxtaposed pay a yellow stone Buzancy, used for strings of angles, door frames and window frames, moldings and corniches3. The game between these two materials gives the rhythm and charm to the main facade. The slate roofs high enough, to embellish skylights to elaborate decoration in neo-Gothic style: the dormers are framed by molded lighters, with a bas-relief decorated with two shells and topped with gables. The creeping of the partition wall is decorated with gargoyles pitched skyward. Above a door lintel, a stone bears the date of 1608 and represents a strong house with hipped roof and carriage door with harrow, framed by two towers pepper shakers, all silhouetted a pediment scrolls carried by two twisted columns. A view of the original seventeenth-century mansion? The main facade, courtyard side, is led by two moldings, on which stand at regular intervals, short ribs each terminated by a carved stone leaf decoration. Between the top molding and cornice, sculptures were placed in the shape of giant mouths with lips and hair. In the corner between the main building and the wing angle, a watchtower was inserted on a wrong fan, wearing a pepper shaker, erasing the junction angle of the two facades. The tower southeast, the most edge of the terrace, offers a courtyard next door to the flamboyant style décor, registering as a stone window in a molded rectangular frame. On the north gable, under a canopy of Gothic or flamboyant style, a stone lion stands, the front legs supported on a shield.

How To Get To Château de Cornay (Map):