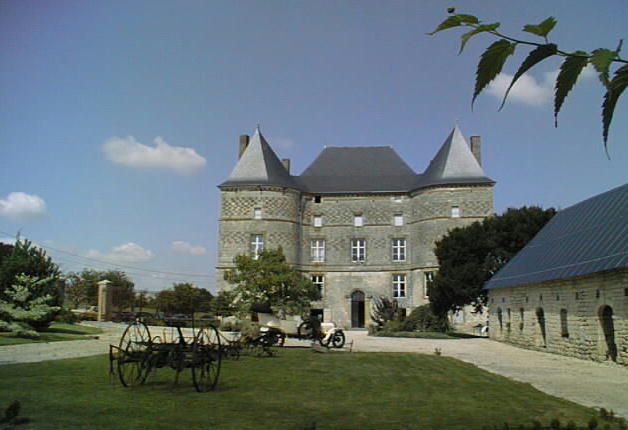 Location: Doumely-Bégny, in the Ardennes departement of France (Champagne-Ardenne Region).
Built: 15th century.
Condition: In good condition.
Ownership / Access: Privately owned.
ISMH Reference Number: PA00078430
Notes: Château de Doumely is a stronghold of the sixteenth century overlooking the countryside of Porcien, and is located Doumely-Bégny in the French Ardennes.Castle Doumely was built around the fifteenth century and sixteenth century on the foundations of the thirteenth century. Some attribute its construction to Tristan Failly who inherited the manor in 1569. Work was carried out at the end of the seventeenth century and common were built in the early eighteenth century, a large barn of 70 m long housing the herd, fodder but also the implementation of hardware products in conditions almost industrial. The castle was during the two world wars, used as a forward command post, field hospital, or in prison. Some inscriptions still visible today on the walls testify. It was partially restored at the end of the twentieth century by the current owner who had acquired a real ruin, this building bears the scars of the developments that have inflicted its successive occupants: filling the moat, facade openings, destruction of the inner levels. The castle is the subject of a filing and registration as a historic monument since December 21, 1984.

How To Get To Château de Doumely (Map):