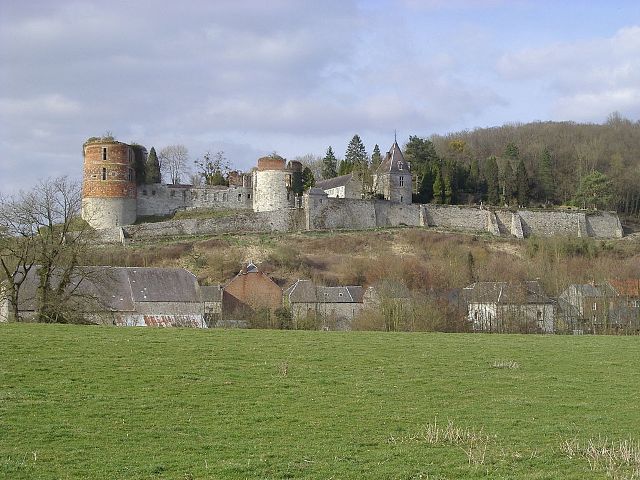 Location: Hierges, in the Ardennes departement of France (Champagne-Ardenne Region).
Built: 16th-18th century.
Condition: In good condition.
Ownership / Access: Privately owned.
Notes: Château de Hierges is located Hagnicourt castle in the Ardennes, France1. It is a stronghold of the sixteenth century, a little apart, done over the centuries to improve comfort and convenience at the expense of defensive vocabulary of the original building.This strong house was built near another military building burned down in 1521 by Charles V, returning from the siege of Mezieres unbeaten. The house was passed from family to family Harzillemont Saint-Quentin to 1620. During the Revolution of 1789, the family did not emigrate and therefore was not robbed of his possessions. After the Peace of Amiens, a count of Bruce, returning emigration, enters the family by marriage covenant. It was Charles-Hector, Count Bruce, from a family descendant of Scottish kings who had accompanied in France Stuart Jacques II of England. Military also participates as colonel in Napoleon's army, the wars of the Empire and died February 7, 1866, to 94 years.Thus, a descendant of the Kings of Scotland became an Ardennes lord. These descendants remained settled in Castle Harzillemont. Just a few decades, the building was acquired by the General Council of the Ardennes, a descendant of Charles Hector Bruce. The building is registered as historical monuments in 1987.Hierges Castle or Castle of Hierges whose original name was "Castle Jerusalem" was built on the site of a castrum whose origins date back to the ninth century. In the tenth century the lordship of Hierges was part of the property of the House of Ardenne. At the time of the Crusades, the fortress of Hierges is attached to the Principality of Liege and in the twelfth century, the castle was destroyed. Castle Hierges was rebuilt in the sixteenth century from (1560), with elements of comfort and openings for guns. In the eighteenth century were built the old and the common pigeon. The castle was besieged in 1792 by the revolutionary then destroyed by fire Nov. 18, 1793.

How To Get To Château de Hierges (Map):