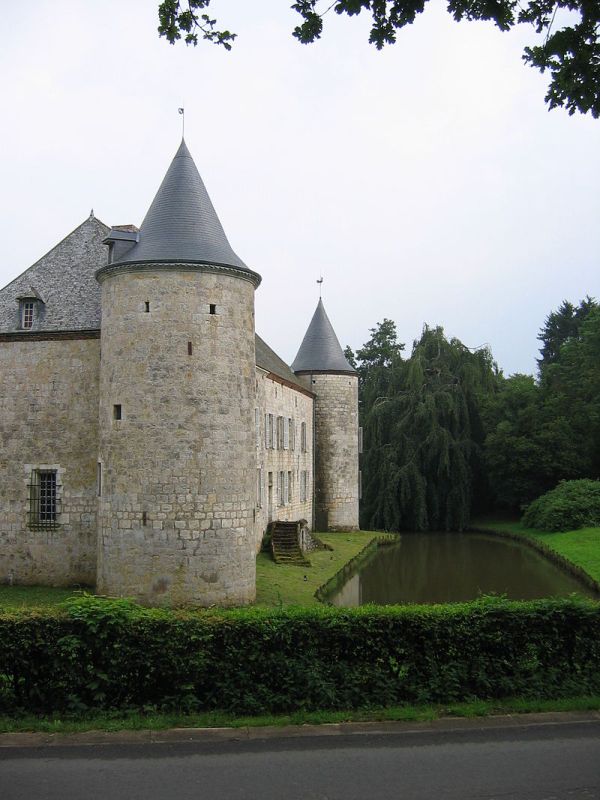 Location: Rumigny, in the Ardennes departement of France (Champagne-Ardenne Region).
Built: 16th century.
Condition: In good condition.
Ownership / Access: Private property.
Notes: Château de la Cour des Prés is a stronghold of the sixteenth century located in the French town of Rumigny in the Ardennes. It is located outside the village, between the road leading to Champlin and the stream of the Dawn. Its construction was encouraged by King Francis I, second line of fortifications erected along the Meuse, to resist possible aggression troops of Charles V. During the French Revolution, the castle was paradoxically the remains of a member to the sensitive Convention charm of this house in feudal pace. The little son of the conventional, the famous archaeologist and pre-historian Edward Piette, also loved staying there and there was a study.Castle Meadows Court was built in the first half of the sixteenth century by an ironmaster of Signy-le-Petit, Louis Martin. In the older rooms, two fireplaces plates are dated from 1546, with Francis I's coat of arms and the flower with four petals, signing the Master of the Forges. Tradition, judged vraisemblable1 wants Louis Martin has paid with his own money this construction, encouraged by King Francis I in his tour of inspection in November 1546 in the Ardennes, and he got in return, although simple bourgeois, permission to add to it a dungeon (now defunct). The house is still owned by descendants of Edward Piette, who maintain and also arranged for guest rooms. Tours and concerts are held every summer in this private property.

How To Get To Château de la Cour des Prés (Map):