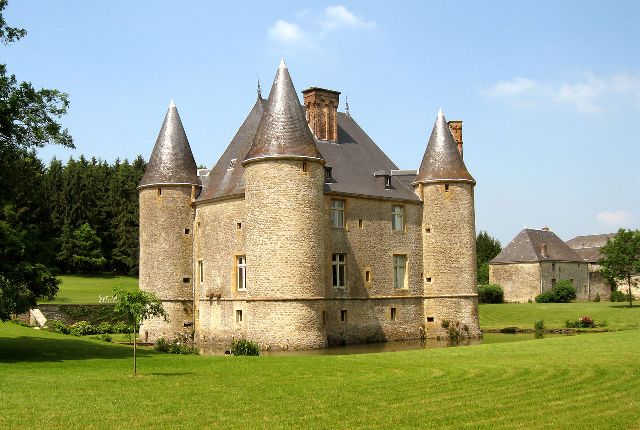 Location: Bayonville, in the Ardennes departement of France (Champagne-Ardenne Region).
Built: 16th century.
Condition: In good condition.
Ownership / Access: Privately owned.
ISMH Reference Number: PA08000010
Notes: Château de Landreville is a castle in the French town of Bayonville in the Ardennes. The Château de Landreville with its four towers and a moat is the subject of a classification as historical monuments since August 12, 2006. Today it is a Luxury Bed & Breakfast Breakfast with both the same as in Castle Hunting Lodge.The manor is documented in the nineteenth century. Landreville Castle was built in the early fourteenth and restructured during the sixteenth. The Château de Landreville represents 800 years of history, tragedies and joys, which were shared by families Landreville, Issenart, Grandpré, Chennery, Beauvais, Maillart Meixmoron ... The Claude-François portrait Maillard (or Maillart ), lord and first Marquis of Landreville, was painted by Nicolas de Largillière 1735. This is where lived the legendary "White Lady" and descendants of John Colin-Maillard, the valiant knight of Huy from which was born the game of blind maillard2. The face, with eyes gouged out Coley Johan Maillard said "The Grand Maillard" and his wife Jeanne Seilles are represented on a stone sculpture of a huge fireplace on the first floor of the castle, where his family lived after leaving Belgium mid-fourteenth century. It was Pierre Maillart, Baron of Landres and owner at the time as well of Gruyères Castle (Ardennes) than that of Landres, who decided to renovate the castle of Landreville in 1567, remains abandoned to itself after a fire destroyed the interior under the occupation of Charles V's army in 1552. He will live there since 1570 with his young wife, Guillemette de Beauvais, owner.

How To Get To Château de Landreville (Map):