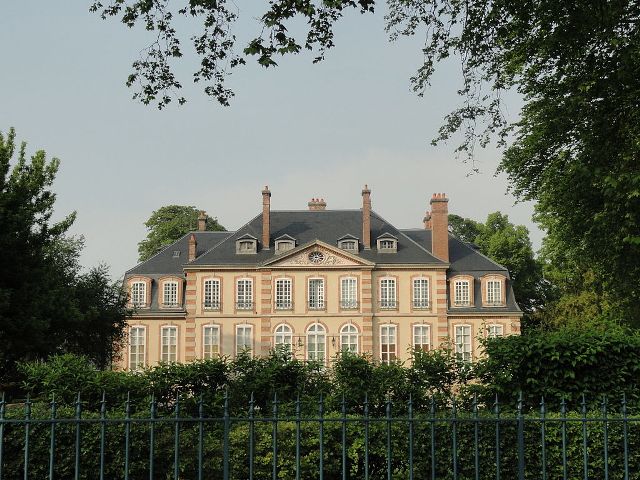 Location: Mareuil-sur-Ay, in the Marne departement of France (Champagne-Ardenne Region).
Built: 18th century.
Condition: In good condition.
Ownership / Access: Owned by a private company.
ISMH Reference Number: PA00078745
Notes: Château de Mareuil is located in the town of Mareuil-sur-Ay, Marne department (region Alsace-Lorraine-Champagne-Ardenne). It is on the list of historic monuments.Its history begins in the middle of the eighteenth century when Jean-Baptiste-Nicolas Thomas of Pange, Lord of Domangeville, third son of Jean-Baptiste Thomas, Marquis of Pange, wedding gift receives the lordship of Mareuil-sur-AY2. Desiring to offer his bride a beautiful house he built the first castle completed in 1765 in the purest Louis XV style, and from 1771 to 1774, he did add red brick siding in memory of the castle of Pange, the castle his childhood in Moselle.After his death and that of his wife two months later, their four children, his Anne-Louise daughter Domangeville who married in 1779 his cousin Count Sérilly, continue to live in the castle in which they receive their family members as the Chevalier de Pange including Anne-Louise is very close as well as politicians and writers of their time as the poet André Chénier or the moralist Joseph Joubert. However, family disagreements led them to sell the estate in 1788 to the Duke of Orleans (the future "Philippe Equality" guillotined November 6, 1793). After the death of the prince, the castle known several owners until in 1830 the two son of Marshal Lannes, Duke of Montebello, took over the area with over a hundred hectares of vineyards. They create the champagne Alfred de Montebello will be distributed to the great crisis of 1929, Tsar Nicolas II receive from Russia in the 1890s.The brand was bought at the bar of the court by René Chayoux, a young entrepreneur from Reims, who also will resume later Ayala brand. After his death, the estate passed into the hands of Jean-Michel Ducellier his right arm, then his son Alain Ducellier who later sold to a Swiss businessman, Jean-Jacques Frey, owner in Bordeaux Château La Lagune . This ends the Montebello brand and sells Ayala Bollinger but retains the castle and fully renovated.