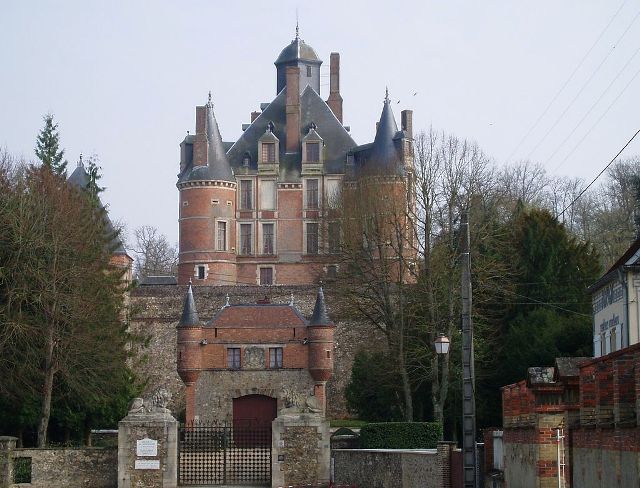 Location: Montmort-Lucy, in the Marne departement of France (Champagne-Ardenne Region).
Built: 15th century.
Condition: In good condition.
Ownership / Access: Private property.
ISMH Reference Number: PA00078747
Notes: Château de Montmort, on the Champagne route, 120 km east of Paris, the Château de Montmort is private property open to group tours by appointment (not of individual visits, cf. montmort.com). Evoking Montmort Castle, Victor Hugo spoke of a "delightful pandemonium vanes turrets, gables, dormers and chimneys"In the Middle Ages, the ancient fortress of Montmort was successively inhabited by many lords. The first lord known by a charter of Counts of Champagne is Germond Montmort in 1042. It then passed into the family of Fay, Athies branch. Hangest family became the owner in 1499. Louis de Hangest, branch of Genlis, married or indeed Jeanne Marie Athies, daughter of Gérard Athies (the Fay), Lord of Montmort, lord of Athies, Bray and Soisy and Catherine of Inchy. Louis Hangest was also lord of Chaleranges. He wore like silver arms to the cross Gules 5 gold shells at lambel 3 pendants azure, as a member of a younger branch of the house. We find this emblem on a carved stone. Around 1530 the estate passed into the hands of their eldest son, Joachim Hangest, who died in 1537, Lord of Moyencourt, and Hangest Chaleranges. He married the 1st 08.25.1525 Françoise de La Marck, daughter of William de la Marck, lord of Aigremont and Renée du Fou, which he had no children. Then he remarried on 07/10/1529 at Isabeau de Montmorency, died in 1529 without leaving her child, daughter of Philip I of Montmorency, lord of Nivelle, and Marie Hornes then 3 or Marie Louise Moy , widow of Lord of Offemont, daughter of Nicolas, Lord of Moy and Françoise de Tardes. by whom he had a daughter, Jeanne de Hangest, real instigator of the reconstruction of the castle. Jeanne Hangest, who married 1 Philippe de Maille, lord of Verneuil, died in 1553 and his second wife Claude Aguerre, baron of Vienna, died in 1559, ensured the reconstruction of the castle, completed in 1577, while preserving its feudal appearance. They had a brilliant descendants: Créquy families Lesdiguières Bethune-Sully, Villeroy and several marshals of France. In many places, there is a monogram formed letters I and C intertwined (Jeanne and Claude). The interior however followed the evolution of styles. The great room is a masterpiece of the seventeenth century. The ground floor comprises a series of vaulted rooms warhead (kitchen, basement room). Christian of Aguerre (1553-1611), lady Montmort, Sault Countess, made him go into the house of Créquy. His son Charles de Blanchefort, said the "Duke of Créquy" Marshal of France owned it after his mother, and after her daughter Françoise Créquy, Maximilian II, wife of Bethune, Marquis de Rosny (son of Grand Sully) 4. Pierre Raymond de Montmort acquired it in 1704; he is famous for his Essay on hazard analysis games (1708) and since then his descendants, the family Crombez Montmort, reside there.

How To Get To Château de Montmort (Map):