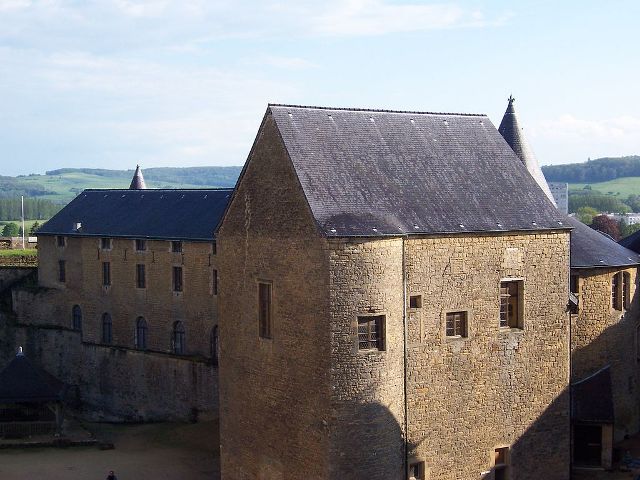 Location: Sedan, in the Haute-Marne departement of France (Champagne-Ardenne Region).
Built: 1424.
Condition: In good condition.
Ownership / Access: Municipality of Sedan.
ISMH Reference Number: PA00078518
Notes: Château de Sedan to above is located on a promontory Sedan on the Meuse river once flanked by two streams, the Bièvre and Vra. This is one of the largest fortresses of medieval Europe with 35,000 m2 on seven floors and walls over 7 m wide (the thicker wall is around 27 m wide). This castle is the subject of a classification as historical monuments since January 4, 1965.Originally the site is a Benedictine priory of the abbey of Mouzon: Saint Martin priory which can be seen sitting in the courtyard. This priory is mentioned in 1306. Evrard de La Marck takes possession of the site in 1424 through his brother Louis Braquemont, bringing his brother dowry her father (William Braquemont) never provided. He decided to build a substantially triangular plan castle on the site around the church became chapel. Excavations have shown that this church had been founded in the eleventh century. Towards 1424, Evrard III de La Marck had built a mansion in six years with two twin towers around a church, a rectangular residential tower which was already part of the priory and a round tower to the west which was later enlarged to become the "Big tour". The twin towers for entrance to the castle was protected by a gatehouse consists of two small, round towers and a watchtower. The plan of the first castle may seem archaic for the time of its construction and has not really taken into account the defense against artillery. When Evrard died in 1440, his son Jean de la Marck began building the fortress but Robert II de la Marck, the grand-son of John, who will carry out the most important work. In 1530, the fortifications of the manor are modernized by the construction of the ring road. The princely house is built on 100 meters along the city side wall from 1530. The Renaissance pavilion in the style of Philibert Delorme was built for Robert IV de la Marck and his wife Françoise de Breze. The Governor's lodge was built in 1536. 1550 are created decks cannons by filling earth between the walls and a new wall socket on the farmyard, increasing the thickness of 4.50 m to 26 m curtain to a level equal to those prevailing site. 18 small dwelling for the troop were created in this filling. From 1553 begins the construction of two triangular bastions on the northeast front, the Governor ended in 1557, and the forked bastion in 1559. In 1572 were delivered the other two strongholds, the Ladies and the stronghold Roy.