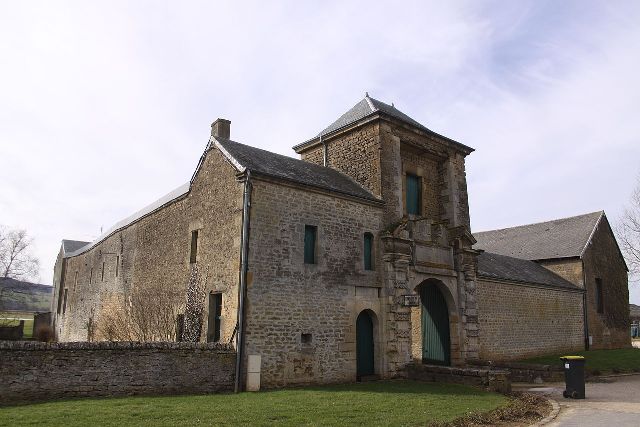 Location: Bazeilles, in the Haute-Marne departement of France (Champagne-Ardenne Region).
Built: 1600.
Condition: In good condition.
Ownership / Access: Privately owned.
ISMH Reference Number: PA00078341
Notes: Château de Turenne is the remains of buildings in Bazeilles, France.The most notable building in the remaining elements, is the entrance pavilion, with its arcade driveway taken in the rebate of a drawbridge, and flanked by two carved pilasters. The whole is topped by an entablature framing a picture of naked stone, inserted in a broken pediment. A gatehouse probably overlooked the entrance to the origin. To the left of the cart door, a second door, smaller, semicircular, fits, too, in the old part of another drawbridge. Further to the left begins the wall bracket in the surrounding garden, built in assisted rubble, and pierced curious shooting stations. Inside the courtyard appears a building with a series of arcades on the ground floor and a relatively low level.The building was built in 1600 by the Prince of Sedan, Henri de La Tour d'Auvergne, Duc de Bouillon, Vicomte de Turenne, who had sent his second son born in 1611, the future Marshal Turenne, 1611 1618. Damaged during the Franco-Prussian war of 1870 and during the First World War, it was partially restored. The building is registered as historical monuments in 1950.

How To Get To Château de Turenne (Map):