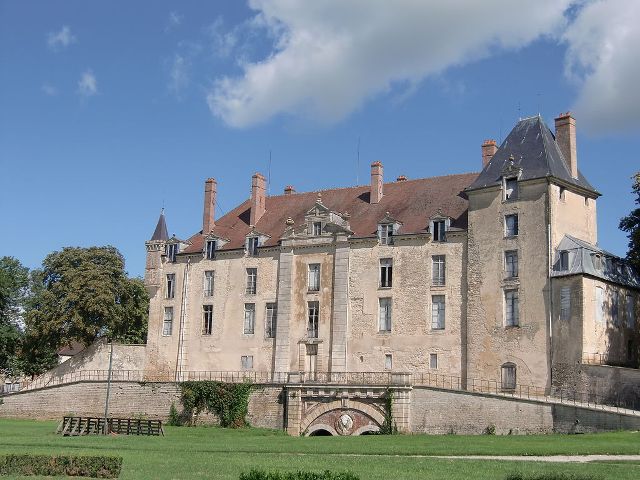 Location: Vendeuvre-sur-Barse, in the Aube departement of France (Champagne-Ardenne Region).
Built: 1603.
Condition: In good condition.
Ownership / Access: Property of the department.
ISMH Reference Number: PA00078296
Notes: Château de Vendeuvre-sur-Barse is a castle in Vendeuvre-sur-Barse, France.A confession made in 1603 by François de Luxembourg described the castle as flanked by towers with park closed walls, very expensive to maintain. In a second confession, dated 1656, Jean IX Migrigny is more explicit. It reports the castle and fortress ... with double drawbridge of: the high court in a large main building and grand staircase I did build; dungeon and big old tower, chapel, towers, stables ... the barnyard, closed ditches and drawbridge, consisting of a housing I had built, too. Significantly modified in the nineteenth century, the castle consists mainly of a large building of massive look, raised in the seventeenth century but largely reusing earlier masonry. The arrival façade to the north present the order characteristic of the Louis XIII, with its windows grouped in the center, its cornice corbels and dormer windows, pediment loaded balls. The south facade, however, is the scarcity of openings to the thickness of its walls, inherited, like those of the west end of the medieval fortress. flanked on one side of a strong quadrangular tower, the other a watchtower added in the nineteenth century, overlooking terraces overlooking a large grassy esplanade, crossed by Barse which originates in the same castle. Double deep, the main building houses a large stone staircase with straight flights supported on trailing arches, decorated with reliefs of neoclassical Simart.From 1107, the family owned the castle Vendeuvre. The castle and the lordship passed to Miles X walnut, Marshal of France and butler, and in the fifteenth century to the family of Mello. The barony of Vendeuvre, one of the oldest Champagne, fell by acquisition to Charles I d'Amboise, governor of Champagne and Burgundy, which bought it from Charles de Mello, in the middle of the fifteenth century. His eldest son, François d'Amboise, Grand Master of the Order of Saint Lazarus, inherited the barony in the late fifteenth century and lived in the castle for a few years. After his death, his younger brother, Charles II of Grand Master Amboise and Marshal of France became the master of the house. After the death of Charles II in 1511, the barony passed into the hands of his sister Catherine d'Amboise (lady Lignières). This gave it to her niece Antoinette d'Amboise (second wife of Antoine de La Rochefoucauld). The latter who married in third nuptials to Prince Louis of Luxembourg, preserved the barony and the castle until his death in 1552. The barony fell in the seventeenth century Henri of Luxembourg, Duke of Piney and Prince of Tingry, and his two girls who sold it in 1638. the buyer John VIII Mesgrigny, State Councillor, obtained in 1644 his erection in marquisate. His son John IX, Viscount of Troyes, Champagne steward and first president of the parliament of Provence and state councilor, rebuilt the main building. Mesgrigny heir, Claude-Léon Bouthillier Chavigny sells the field in 1752 to Gabriel Paved Provenchères, grandfather of William Paved Vendeuvre which under Louis Philippe chair the General Council of the Dawn. The building is registered as historical monuments in 1963 and 1981, and ranked in 1981.

How To Get To Château de Vendeuvre-sur-Barse (Map):