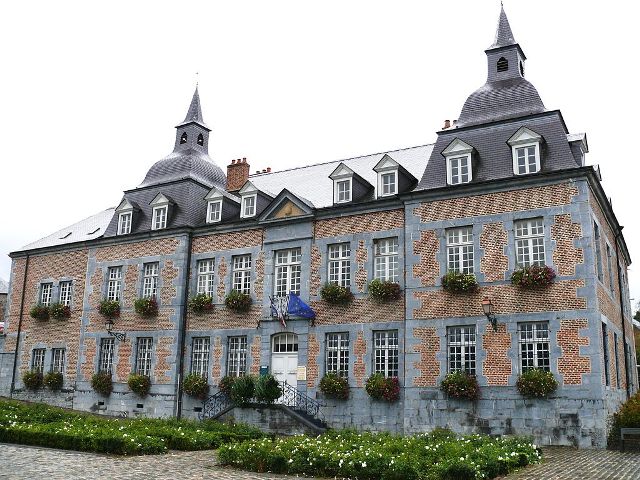 Location: Fumay, in the Ardennes departement of France (Champagne-Ardenne Region).
Built: 17th century.
Condition: In good condition.
Ownership / Access: Owned by the town.
ISMH Reference Number: PA00078440
Notes: Château des comtes de Bryas is a castle located in Fumay, France.The main facade, built of brick, is structured by channels in blue stone. The central bay is topped by a triangular pediment. The side pavilions are topped by roofs shaped inverted tulip, with octagonal dome, blind lanterns and octagonal spire. The roof is covered with purple slate of Fumay.A path is accessed down the steps to the right of the building. It allowed minors from accessing the slate of Moulin Sainte Anne. Along this, we see the other side of the Meuse, the retaining walls of the slate Belle-Rose.The castle stands on the site of an old fort, shaved under Louis XIII, and one vaulted room left under the current median.The castle was built by the family of Bryas, Lord of Fumay in the fourth quarter of the seventeenth century. It is then sold in 1815 to a local contractor who installs are a factory of white lead. The slate Society of Moulin Sainte Anne bought it in 1835 and made its headquarters. It remains up to the complete sale of the company's property in 1946. It became the property of the city of Fumay in 1952 and houses the municipal services, post and perception.The building is registered as historical monuments in 1972.