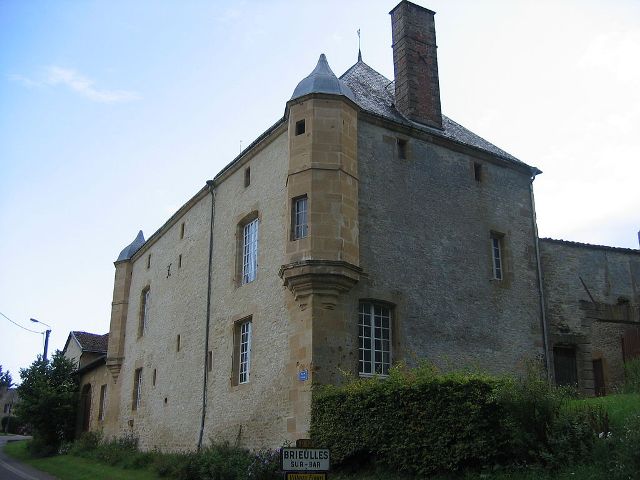 Location: Brieulles-sur-Bar, in the Ardennes departement of France (Champagne-Ardenne Region).
Built: --
Condition: In good condition.
Ownership / Access: --
Notes: Château-ferme de Brieulles-sur-Bar is a farm-castle in Brieulles-sur-Bar, France.This building is characterized by a sober façade, rubble, flanked by two polygonal towers in apparaillées stones placed on cantilevered moldings and topped with pittoresques roofs. The stone is a stone, a yellow stone Authe. The windows have been enlarged. Two gates and a low door, surmounted by a gatehouse, give access to the courtyard, with its interesting result of arcades decorated with sculpted keys. The portal directly on the road is a basket handle, framed stone to shear and vermiculated. The other portal provides a slight ramp opening on the footpath to the road a little further.On a document dated 10 October 1578, reads: "... Next good voulenté and gift gratuitte that the Duc de Nevers and Count Rethellois hath made and granted its citizens, manans and inhabitants of the town of Brieulles- sur-Bar, for Ayder has fortiffier and close to the seureté of their persons and property; what they ordinnairement working .... and oultre this, twenty-five oaks to be used to make the attic doors, turrets bridge-Levys dudict Brieulles ... ". There is no guarantee that the works cited concern that building. The castle appears in the following century the seat of the stronghold of the Tournelles, Collart of property. Sold in 1914, it was transformed into farm. In 1945, the building is registered as historical monuments.