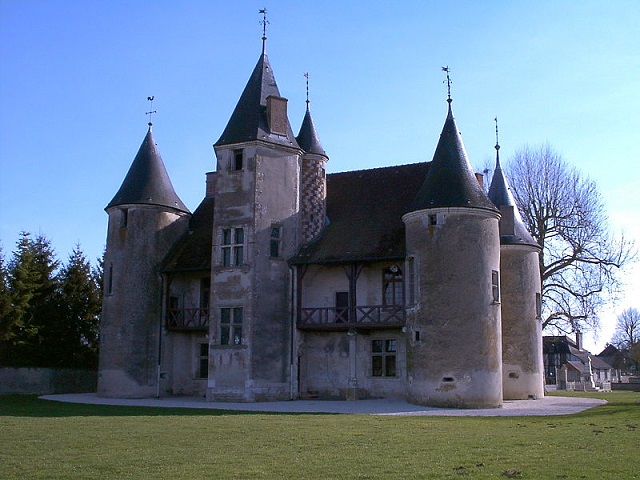 Location: Rumilly-lès-Vaudes, in the Marne departement of France (Champagne-Ardenne Region).
Built: --.
Condition: --.
Ownership / Access: Commune.
Notes: The manor of Tourelles is a manor located in Rumilly-lès-Vaudes, France.Originally fortified, as evidenced by the four corner turrets pierced with gunboats, close to the "tithes barn, it was administrative residence of the representatives of the King of France, managing the estate, in his name and in the name of 'Abbot de Molesme, both lords on the land of Rumilly. Among these delegates of power, was the seneschal of Champagne Louis II of Orleans (1384), the future Louis XII; Its mutilated weapons adorn the north door of the manor and the fireplace is on the ground floor. Pierre Pion, a rich butcher of Troyes who, in 1530, gave his personal touch to the building, before Francis II of Vienna, Abbot of Molesme, after his death, decorated the cloaks of the four chimneys. Declared a national property during the Revolution, it fell to Labilles de la Rocatelle (an estate on the territory of Rumilly). The municipality acquires it in 1902 to install the town hall and the school of the boys. In 1947, the two classes which had found asylum left it to integrate a new school group. The Manoir des Tourelles remains today the official town hall of Rumilly and the ground floor has been converted into a reception room. A gallery runs on the first floor of its southern facade, decorated with medieval lamps, supported by six twisted columns with armored capitals. The entrance door is surmounted by royal arms surrounded by the cordon of the order of Saint-Michel. On the north side, the door of the central hexagonal turret opens onto a staircase with screws of exceptional width, adorned at each corner of an animal or legendary character. On the ground floor, on a beam of the beautiful Renaissance ceiling (both full and empty), Pierre Pion had his arms carved with those of his wife and members of his family. On the first floor, the west chimney, offers the coat of arms of Antoine II of Vienne abbot of Molesme. One of the four turrets houses an oratory with an elegant, simple and discreet vault. At the entrance of the attic, the structure of which is in the shape of a hull of an inverted vessel, the column with the sculpted capital which terminates the screw of the neighboring staircase with a gallery of pierced stone. The memories of the Companions who contributed to the construction and renovation of the manor hang clearly and constantly outside and inside the building: three vaults in the basement, in tribute to the three founders of the compagnonnage , Column with reversed turns, pictures of the dog and the wolf, the fox holding in his mouth a hen, mistake in the composition of a plate of chimney. Everything is to be seen in this mansion, the only rural edifice of the department classified sixteenth century, and preserved in its integrity.