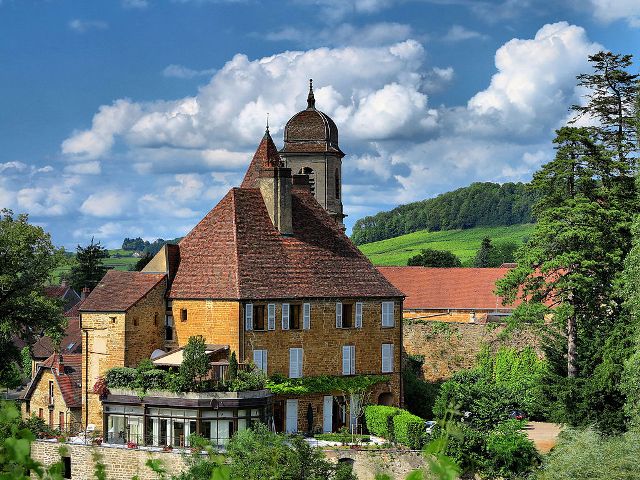 Location: Arbois, in the Jura departement of France (Franche-Comté Region).
Built: 11th century.
Condition: In good condition.
Ownership / Access: Private property.
Notes: Château Bontemps is a private castle of the seventeenth century in Arbois in the Jura in Franche-Comté. It is a listed building since April 17, 1989.In the seventeenth century the castle was built in ocher stone, like the imperial dome with bell tower of the eighteenth century the Saint-Just d'Arbois church.In the thirteenth century the building was built in the fortifications of the city along the Cuisance, with Pécauld castle, the Saint-Just d'Arbois and the Gazebo tour ... In 1479 it was destroyed along with the city of Arbois (and a hundred other cities and castles) during the reconquest of Burgundy County by the troops of King Louis XI of France (succession of Charles the Bold).The canon of the Notre-Dame d'Arbois Pierre Bontemps buys ruins, restores and lives in the castle, followed by the heirs of the family Bontemps, to the French Revolution and the building was sold as national property in 1793 .In 1847 the castle was sold by the court of Arbois the architect André Perrard makes the restore. It is then sold by several private successive owners to this day.