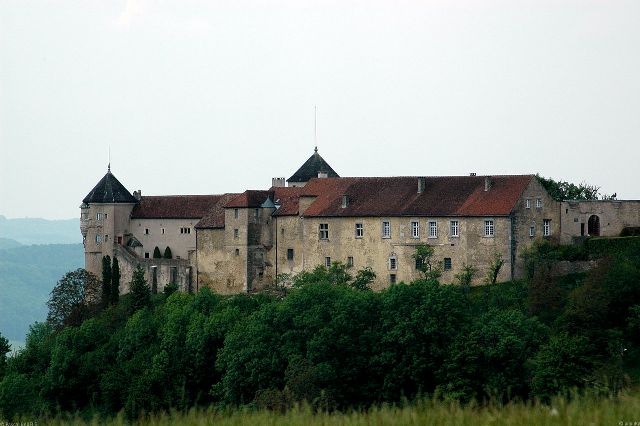 Location: Belvoir, in the Doubs departement of France (Franche-Comté Region).
Built: 12th-13th century.
Condition: In good condition.
Ownership / Access: Privately owned.
ISMH Reference Number: PA00101450
Notes: Château de Belvoir is a castle of the twelfth century at Belvoir in the department of Doubs. It is the subject of a registration as a historic monument since September 6, 1956.Built in the late nineteenth and early thirteenth century by the founders of the house of Belvoir, the lordship happen in the house of Cusance the middle of the fourteenth century. Loyal vassals of the Dukes of Burgundy, the Cusance be under arms to Nancy disaster in 1477. In retaliation, the castle was burned down by the troops of Louis XI in 1480 and areas sequestered for 6 years. Restored and modernized by Thibaut Cusance in the late fifteenth century, the eastern wing will be a new development in the early seventeenth century by Claude-François Cusance, colonel of a regiment or Tercio bourguignon 3000 men in the service of Spain in Flanders, to accommodate his young wife Ernestine Withem, Marchioness of Bergen-op-Zoom. Their eldest daughter was the famous Beatrice Cusance, considered one of the most beautiful women of her time, she married in 1st wedding of Prince Cantecroix heir Granvelle and grand-son of the Emperor Rudolf II, then Duke Charles IV of Lorraine and Bar. Belvoir will more regularly inhabited by its owners from the second half of the seventeenth century. Past the family of Lorraine to that of Rohan, the last baroness was the Princess Marie-Louise de Rohan-Soubise, Countess de Marsan, governess to the children of Louis XVI and Marie Antoinette. Transformed into minor seminary and in Catholic school, abandoned in Besançon of the archdiocese by the heirs of the family of Rohan in 1848, the castle was then parceled and sold to several farmers. Bought in 1955 by the famous painter Pierre Jouffroy, it will be a long and patient restoration for nearly 50 years. After the terrible fire that destroyed the east wing in 1968, 10 years will be needed to meet this building from ruin. Fully furnished, it presents various collections of furniture, old paintings, antique weapons and historical souvenirs. It is open to the Easter visit to All Saints, on Sundays and holidays, and every day in July and August.

How To Get To Château de Belvoir (Map):