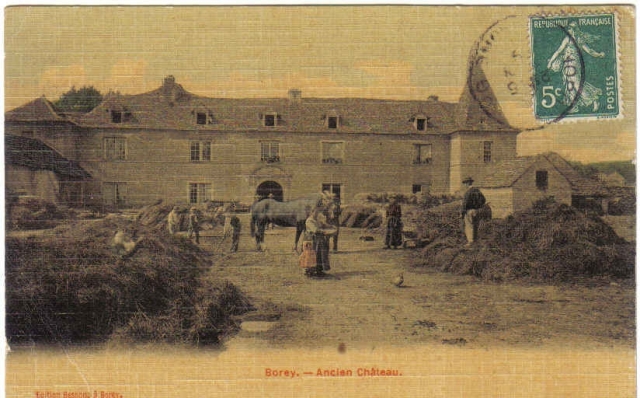 Location: Borey, in the Haute-Saône departement of France (Franche-Comté Region).
Built: 16th century.
Condition: In good condition.
Ownership / Access: --
Notes: Château de Borey, classical style is typical of mansions built in Franche-Comté before the Revolution from the sixteenth century. It is located in the department of Haute-Saône, in the municipality of Borey.The existence of a primitive building, likely in the form of a fortified house, is attested by the archives that show in a treaty from 1603 with a pre jointing piece to the moat of the Castle moat. By installing the building south of the village on the edge of the Reach the stream and one from the source of the Valleys, the first lords took advantage of these two rivers coming together downstream to form a defensive protection. Ditches open to the North and West will be filled after the current castle dates in its oldest part of the late sixteenth century. The Sharp family, then became Tranchant of Verne, will perform restorations and modifications during the seventeenth century and the eighteenth century, including the addition of a main building at the back of the original main building. During the Revolution, the castle will serve as a common room, the active citizens of the town meeting November 18, 1790 and November 11, 1791 in the castle Poille to elect the mayor. A battalion of volunteers settles December 29, 1791 and made off with furniture among which are books and silverware Alix unsworn the priest who fled the village. On 10 January 1792, the residents gathered at the sound of the tocsin, find that a fire started in a room because of too large fires that volunteers have made in said chamber where it caused considerable damage. The East Tower will lose its roof in this disaster and will be rebuilt lesser height, not finding his first appearance in 2006. Sold as national property to citizens Goulut former farmer of lords, the castle will be divided between several owners until its recent restoration by the current occupants.The castle, private property consists of a long main building with one floor, east-west, flanked by two pavilions and towers protruding. In its center, a gateway in semicircular arch faced the back of the building. In its pediment showing the date 1684 and two coats of arms surmounted by a crown, hammered during the Revolution. The set is of great sobriety. The rear part, built in the eighteenth century contained the chapel. It was completely rebuilt following a fire in the nineteenth century. Common, located in front of the main building, dating from the seventeenth and eighteenth century.