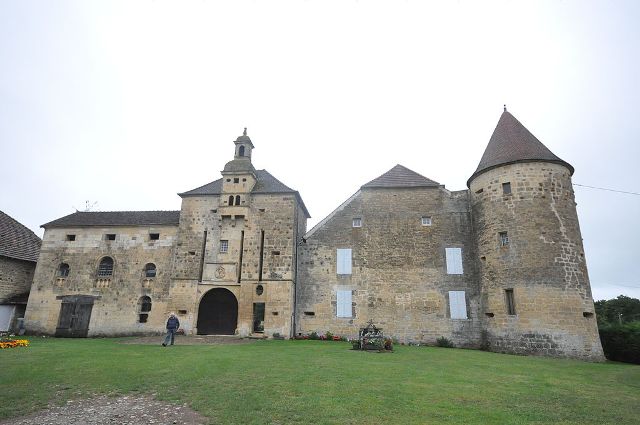 Location: Bougey, in the Haute-Saône departement of France (Franche-Comté Region).
Built: 16th-18th century.
Condition: In good condition.
Ownership / Access: Privately owned.
ISMH Reference Number: PA00102121
Notes: Château de Bougey is a castle Bougey, France.The originality of this castle is topped his watchtower on a pinnacle bretèche (front building placed Standing on a fortified wall). The four towers that flanked the cause, the fact remains that dated to 1585. On the walls, one can see "pustules bosses" whose usefulness remains mysterious. The part dating from the classical period door windows with balusters while the round tower is the last vestige of the fortified complex of origin. The medieval defense system were added party to the architecture influenced by the Lorraine and Champagne style.The castle served as a farm nineteenth and twentieth centuries. In 1944, the castle housed a clandestine hospital where they treated the Germans as well as resistant, which probably enabled him to not be completely destroyed. The building is registered as historical monuments in 1979.