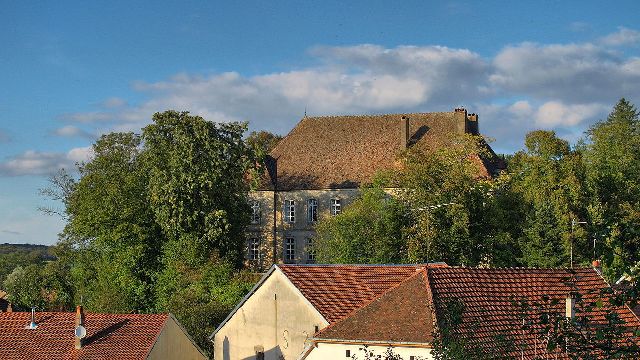 Location: Boult, in the Haute-Saône departement of France (Franche-Comté Region).
Built: 18th century.
Condition: In good condition.
Ownership / Access: Privately owned.
ISMH Reference Number: PA70000023
Notes: Château de Boult is a castle in Boult, France. Preceded by two terraces to the south side of town, the house opens to the north onto a courtyard bordered on the west by old stables and on the east by a barnyard with farm and dovecote. The home of rectangular plan with projecting pavilions at the ends garde decorative elements of the eighteenth century (oak paneling, fireplace) and an imposing staircase whose pillar is decorated with statues attributed to Gardaire. The castle is not open.The building is registered as historical monuments 1998.Construit in 1745 by Claude Antoine d'Hennezel on the plans of the architect sculptor Claude Damien Gardaire, in place of an older building that was already in ruins at fifteenth century.