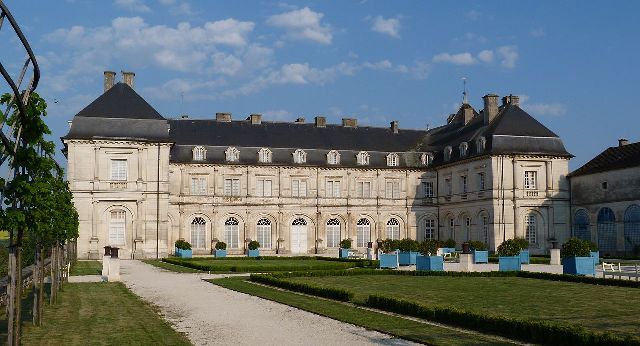 Location: Champlitte, in the Haute-Saône departement of France (Franche-Comté Region).
Built: 18th century.
Condition: In good condition.
Ownership / Access: Owned by the Town.
ISMH Reference Number: PA00102129
Notes: Château de Champlitte is a building built in the eighteenth century in the French town of Champlitte, in Haute-Saône. It currently houses the county museum of arts and popular traditions.A castle is attested in the Middle Ages, burned several times. The lords of Fouvent acting as masters in their manor, built a castle atop the hill, near an older home stand (Gallo-Roman): the village of Champlitte-la-Ville located 1km300, located in the valley and no defensive value, in competition with the new center born of the castle, the castrum which it is installed on a mound. Archaeological surveys conducted in 2010 by INRAP testify this presence and position. The living quarters are fixed inside the fortress, in the yard, the town grows in the valley between the castle and the bridge; the halls and walls are mentioned since 1252 1: the gap is the first hurdle for the one that comes from outside, it can measure between 15 and 20 meters behind and the gap is the originally rampart certainly bois. The nearby castle protects commercial and craft activities. The city will then be populated by monasteries: Benedictine St. Priory Christophe Champlitte-la-Ville, the Couvent des Augustins (fourteenth century), the collegiate Chapter (1439) and then in 1475 when the city was ruined, Charles made close the town by a wall lined by a moat and fortified several turns. Some remains from this period are currently still visible (Annonciades Tour, Tour Charles V ditch Augustinian monastery) and the topography of the streets used to read the old structure of the city. The Lordship of Champlitte then belongs to a cadet branch of the house of Vergy.