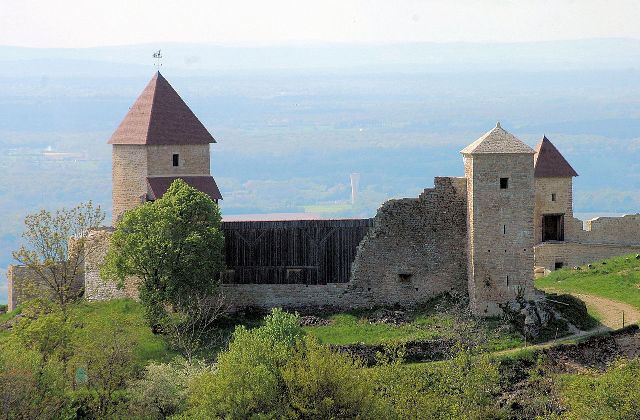 Location: Chevreaux, in the Jura departement of France (Franche-Comté Region).
Built: 17th century.
Condition: Ruins.
Ownership / Access: --
Notes: Château de Chevreaux the Bresse plain from its bedrock located at an altitude of 473 m.It is located in the municipality of Goats in the Jura (Bourgogne-Franche-Comté).In 974, Manasses III, Lord of Coligny donated land of "Chevrel" and "Chastel" the monks of Gigny-sur-Suran. The castle is mentioned for the first time in 1158 in a narration of the monks of the Abbey of the mirror. It was the seat of a manor owned by the house of Coligny (construction until 1332), in particular by Humbert de Coligny, founder of the Abbey of Our Lady of the mirror, then Guerric Coligny. It then passed to the lords of Montluel (from 1270-1332) to Vienna (from 1332 to 1651), then to Damascus. The Lordship receives the title of barony to the early sixteenth century. A 1628 text refers "Castle and stronghold of Goats, although coated towers and good defense wall, where there are twelve rooms with fire, chapel, kitchen, sommelier, and five or six barns and beautiful vaulted cellars, all the stables, ovens, bakery room and beautiful garden. " April 2, 1637, during the Ten Years' War, the Duke of Longueville besieging the castle, which is taken, plundered and ransacked background in height; the dungeon which had resisted the cannon is destroyed at the mine and the fortifications were demolished. Since 1990, the castle enjoys restoration projects.