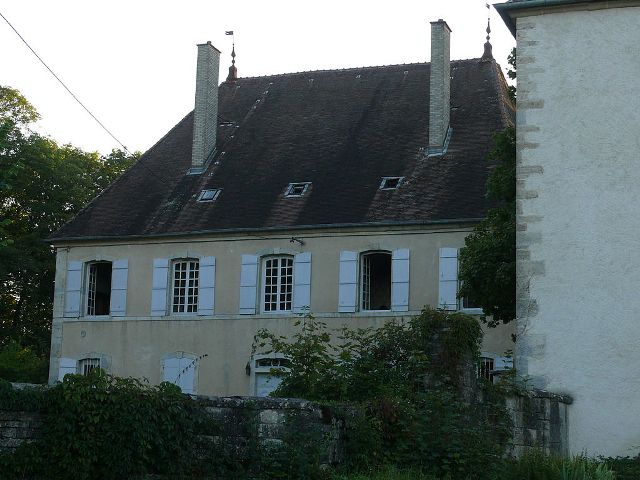 Location: Colombe-lès-Vesoul, in the Haute-Saône departement of France (Franche-Comté Region).
Built: 18th century.
Condition: In good condition.
Ownership / Access: famille Lyautey de Colombe.
ISMH Reference Number: PA00102139
Notes: Château de Colombe-lès-Vesoul is a castle of the eighteenth century, in that commune, near Vesoul. It is the subject of a registration as a historic monument since September 5, 1988.It was built in 1732 by Anatoile Lyautey of Colombe, Lord of Colombe and Essernay, remained in the family ever since. Located on a limestone plateau overlooking the valley where the Columbine crosses. It keeps interior décor from the time of its construction (paneling, fireplaces . Everything is original, it also has a private chapel on the first floor. The annexes are the outbuildings, stables, dovecote and a stately tower deep in the park.Anatoile Colombe was lord of Colombe and Essernay, and especially former tax collector of the Bailiwick, Viscount Mayeur de Vesoul. The Lyautey of Colombe was azure, gold fess faith in moving the two sides of the shield, in chief a golden sun too, and in base three cinquefoils money.Colombe village and the hamlet of Essernay Between Vesoul and Ognon valley -from Villersexel- extend limestone tables, red soil shallow, large trays triangle stony swept cold winds, covered with wood which once hid the wolves. The man stood good hours on the territory of Colombe. At the edge of these plates, a league east of the ancient capital of the Bailiwick of Upstream what situated the town of Colombe-lès-Vesoul. It consists of two centers: the village of Columbus and the hamlet of Essernay. The altitude varies from 277 meters to the entrance of the village, near the castle, at 336 meters above and to the east of the hamlet. The big white houses, red or gray roofs of the village of Columbus, with its bulbous steeple with glazed tiles are grouped on a convex side of the Columbine, not in the valley, but safe from flooding at the top slope of the hillside. The name of Dove was given in general in places where pigeons were reared and in this case the name of the river would be later in the name of the village and those of similar shape (Calmoutier, Colombotte) that spans the along the course of the Columbine. It is however not impossible, given the proximity of Luxeuil, that Colombe is an alteration of the name of Colomban, but we lack enough evidence for ancient forms. As for the hamlet of Essernay - patois Chasna - it originated oak trees that once covered the region. The castle now belongs to the family of Reboul, following an alliance between families DOVE / Reboul.