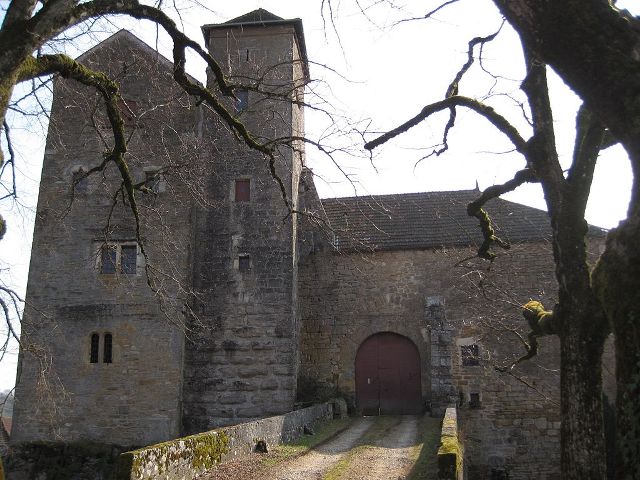 Location: Abbans-Dessus, in the Doubs departement of France (Franche-Comté Region).
Built: 13th century.
Condition: Ruins.
Ownership / Access: Privately owned.
ISMH Reference Number: PA00101435
Notes: Château de Jouffroy-d'Abbans (or Abbans Castle) is a castle of the thirteenth century classified as historical monuments, located on the town of Abbans-Dessus, in the French department of Doubs. The castle saw the inventor Claude Jouffroy d'Abbans (1751-1832) to design and build its first steamboat.The original stronghold was built by the lords of Abbans, whose origins date back to the ninth century castle that descendents then occupied until the early twentieth century. Following a fire, the property is rebuilt in the twelfth century: the tower, consisting of two towers date from that time. In 1718, the Marquis de Jouffroy Abbans, grandfather of the namesake inventor, bought an old part of the ruined castral area that the family no longer possessed, and began rehabilitation work from that time. Claude Jouffroy Abbans going on in this castle a large part of his youth and in 1776 built there one of his first steamships. The platform, home of the body, buildings joint, the garden house and the garden are the subject of a registration as a historic monument since 7 August 1992.The dungeon and the portrait gallery of the ground floor of the castle are the subject of a classification as historical monuments since July 5, 1993.