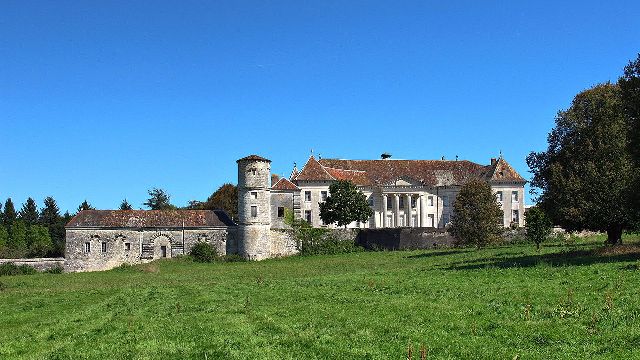 Location: Moncley, in the Doubs departement of France (Franche-Comté Region).
Built: 1778.
Condition: In good condition.
Ownership / Access: Private property.
ISMH Reference Number: PA00101672
Notes: Château de Moncley is a neoclassical style castle of the eighteenth century to Moncley and partly on that of Émagny Doubs in Bourgogne-Franche-Comté (15 km northwest of Besançon). The castle and its outbuildings are classified as historical monuments January 13, 1944 and again in 2002. It is open to visitors from May to October.The castle was built between 1778 and 1790 by the architect Claude Joseph Alexandre Bertrand (disciple of architect Claude-Nicolas Ledoux) near an old feudal fortress of origin, for the Marquis Francois Terrier Santans (first president of Parlement of Besançon, also owner of the Hotel Terrier Santans Besançon). It is owned by the same family since its construction. The neoclassical features beautiful examples in Franche-Comté, the Moncley castle is. The castle contains a remarkable collection of wallpapers installed from 1785 to 1787 many pieces of furniture and period paintings.

How To Get To Château de Moncley (Map):