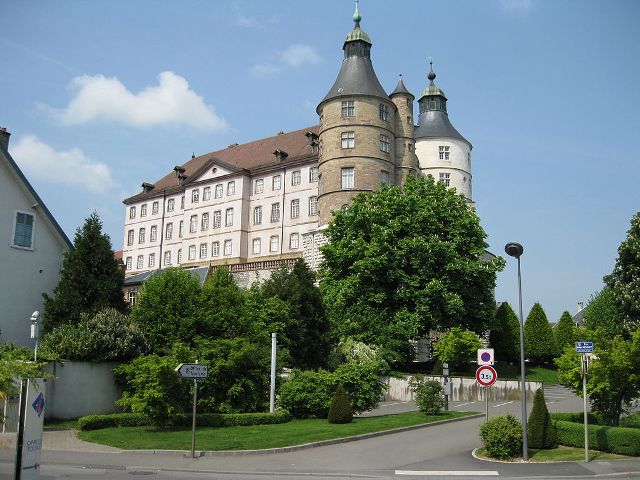 Location: Montbéliard, in the Doubs departement of France (Franche-Comté Region).
Built: 13th century.
Condition: In good condition.
Ownership / Access: Owned by the Town.
ISMH Reference Number: PA00101673
Notes: Château de Montbéliard or Württemberg dukes castle is a strong French castle of the thirteenth century the Montbéliard county and Renaissance Montbéliard principality situated on a rocky ridge overlooking the town of Montbeliard in the Doubs Bourgogne-Franche-Comté. It is classified as historical monuments since July 1996 and is home to date including the Museum of the Castle of the Dukes of Württemberg and the Museum of Archaeology and Natural History of Montbéliard.It is believed that the origins of the fortress dates back to Roman times. It was probably a tower of wooden watchtower, an observation outpost around the town of Mandeure (Epomanduodurum) to ensure its defense. The current castle dates from the thirteenth century and belongs to the family of Montfaucon, vassal of the county of Burgundy. In 1407 Henriette de Montfaucon (Henriette d'Orbe) married the German Count Eberhard IV of Wurtemberg, son of Count Eberhard III of Württemberg, and passed Montbéliard in the area of this family under suzerainty of the Holy Roman Empire for four centuries.In 1793, the castle was attached to the French Republic as a garrison, a role he filled until 1933. It becomes a workhouse in 1811 by applying the imperial decree of November 29, 1810 until December, 1813, date of the arrival of the Confederates in the Montbéliard. It will then military hospital as already in 1794 for the Rhine Army in 1799 or for the army of General Massena after his victory in Zurich. In 1816, with the incorporation of the Montbéliard in the Doubs department, a jail is installed in the castle vaults. She stayed there until 1836. However, this is not the first time that the Château de Montbéliard has housed a prison. There existed between the seventeenth and the eighteenth century, a state prison whose arched door was surmounted by a bear: the Berloc (Boehrenloch) or "Trou aux Ours". Legend has it that Prince Frederic who had reported a black bear during a hunting party and is installed in a specially equipped tank. Today, the castle houses a museum tracing the history of the country and the Museum of Archaeology and Natural History of Montbéliard since 1937.

How To Get To Château de Montbéliard (Map):