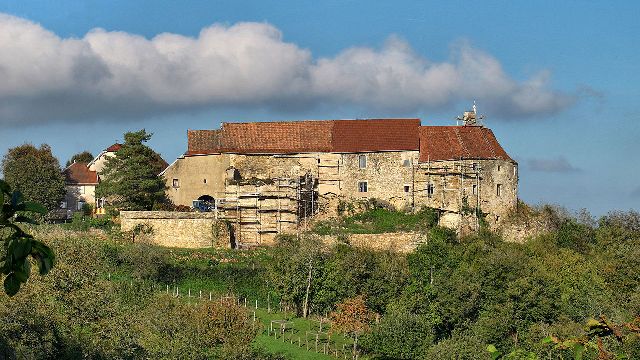 Location: Gondenans-Montby, in the Doubs departement of France (Franche-Comté Region).
Built: 14th century.
Condition: In good condition.
Ownership / Access: Private property.
ISMH Reference Number: PA25000067
Notes: Château de Montby is an ancient fortress and stately residence built in the fourteenth century by the eponymous family, instead of a construction of the eleventh century on the plateau Montby, today the northern part of the municipality of Gondenans -Montby, Doubs. It is now owned by the family Mettetal and is registered with the additional inventory of historic monuments since 8 December 2009.The first known mention of the castle comes from a document of the fourteenth century. Besieged and devastated in 1351, 1475, 1543 and 1637 the castle underwent many repairs and modifications making it an architecturally rich building. During the Revolution, it was sold as national property and converted to farm until the mid-twentieth century. In 2008 is created the Friends of the Castle of Montby to help the new owners to save, restore, manage and promote the castle, registered the following year, with the additional inventory of historic monuments.