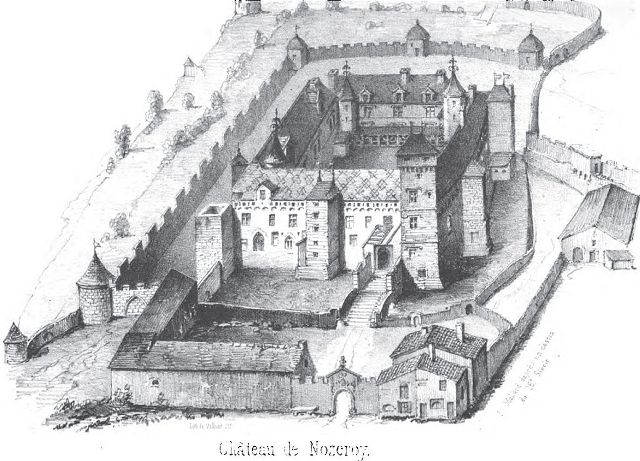 Location: Nozeroy, in the Jura departement of France (Franche-Comté Region).
Built: 1262-1432.
Condition: In good condition.
Ownership / Access: Privately owned.
ISMH Reference Number: PA00101973
Notes: Château de Nozeroy or palace Nozeroy is a former luxurious ruined palace of the fifteenth century, known at the time the "Pearl of the Jura", built on a castle of the thirteenth century in Nozeroy (capital for 300 years Jura stronghold the Chalon-Arlay, Franche-Comté). The ruins are listed as historical monuments since July 15, 1927.In 1262 the powerful and wealthy lord John, Count of Chalon, founder of the Chalon-Arlay, built this castle as a residence, protected by high walls, trenches and eight laps in Nozeroy, the capital walled he founded the center of his vast new stronghold Jura, along with a thirty other fortresses to protect their lordships, the lordship of Salins, and its rich salt industry including in particular the salt of Lons -le-Saunier and saline of Salins-les-Bains (Jura history of salt). In 1432 Prince Louis II of Chalon-Arlay, son and heir of Lord John III of Chalon-Arlay and Princess Marie Baux-Orange, made entirely reconstruct a luxurious freestone Renaissance palace defended by four towers on location of the castle of his predecessors. This palace then nicknamed the "Pearl of Jura" is luxurious retreat in the family of the lords of Chalon-Arlay and Prince of Orange. The wing southeast of the palace contains the ground floor a room of about 35 by 14 meters of surface. The palace is richly decorated with tapestries, silver and dishes of gold and silver. The prince and his descendants maintain a prestigious court, there organized numerous lavish parties and will receive distinguished guests of the time that the Dukes of Burgundy Philip the Good and Charles the Bold, the Princes of Savoy and the Dauphin of France and future King Louis XI in 1456. the pomp of the place is mentioned in many texts of the humanist theologian Gilbert Cousin.