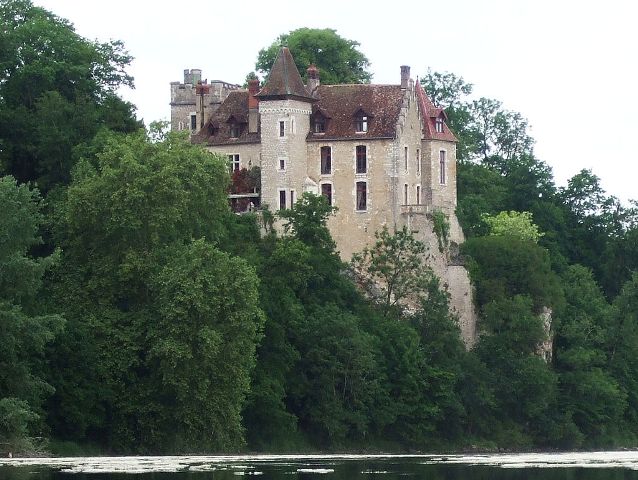 Location: Thoraise, in the Doubs departement of France (Franche-Comté Region).
Built: 17th century.
Condition: In good condition.
Ownership / Access: --
Notes: Château de Thoraise is located Thoraise Thoraise castle in the French department of Doubs.The eighteenth century to the fifteenth century, its history is closely linked to the fate of the lords and the lords of Montferrand. It is part then a set of fortifications belonging to them, including those of Montferrand-le-Château, Torpoint, Corcondray, Fourg and Avanne. The first written mentioning the existence of the castle dates from 1273. The lordship was founded in 1250 (the castle built in the same year) by one of the seven son of Sir John de Montferrand (second of the name of the house of lords and lords of Montferrand-le-Château): Hugh Monferrand rod the house of Thoraise. In 1268, Pierre de Montferrand, squire and Viscount in 1260 appointed by Thibaud IV de Rougemont then engages in a war (conflict of interest) with his uncle Hugues de Montferrand (who pledged allegiance to Count Otto IV of Burgundy and promises to give him the lordships of Grandfontaine, Mont and wood Vernois, the latter two now part of the town of Montferrand) and destroyed the castle of Thoraise.However several feudal writings found by historians refer to a consistent and well-stocked cellar at the castle, proof of good health of the lordship over the years of medieval disorders. It is reported there even a passage from John Abbans (sire and knight of the house of Abbans-Dessus) in 1336 which pierced the barrels there with his halberd to quench his soldiery. Vestiges of this medieval era still exist today on the site. In 1385, heralding the end of the grip of powerful lords of Montferrand on the northern perimeter of the Doubs: Besancon to the edge of the forest of Chaux (east of Dole) including Thoraise, the castle passed into the hands Dukes of Burgundy. In 1534, it became the property of the lords of Achey. A 1584 document mentions ruins in the past on this site and certify at least proved a reconstruction of the castle to a date prior to 1584 (is it the reconstruction of the castle after its destruction in 1268 and / or one or more subsequent partial or total reconstructions 1268?). That same year, the lordship of Thoraise acquired a mill whose activity will be paramount in the village economy until its termination in 1900. Over time, the castle changes ownership but continues to defend its feudal prerogatives. Again demolished after 1584, it was rebuilt again in the seventeenth century. In 1793, the last aristocrat raw, Maximilian of Izelin Lanans, field marshal of the king's army, emigrated: the field is immediately sold as national property. The famous French painter Gustave Courbet, a native of Besançon region (Ornans), in fact the subject of a painting dated 1865. During the nineteenth century the castle was restored in the respect of its medieval balance, in a neo-renaissance style. Since the last known owner in 2011 is a Besançon: Mr. Sylvain Bohrer.