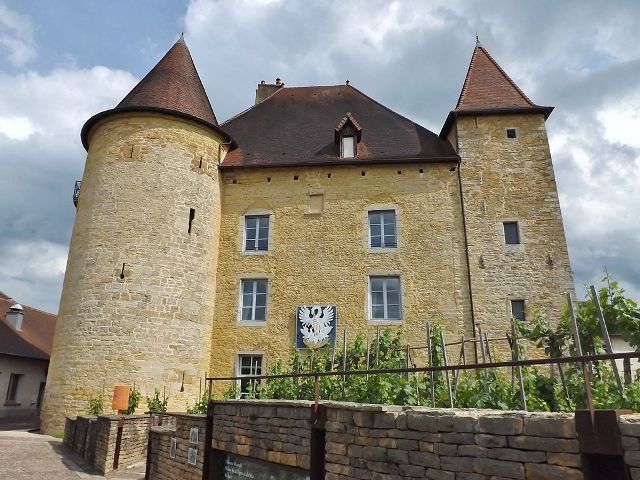 Location: Arbois, in the Jura departement of France (Franche-Comté Region).
Built: 17th century.
Condition: In good condition.
Ownership / Access: Owned by the Town.
ISMH Reference Number: PA00101800
Notes: Château Pécauld is a castle of the seventeenth century in Arbois in the Jura in Bourgogne-Franche-Comté. It houses the Museum of the vine and wine since 1993 (Jura vineyards) and is registered as historical monuments since November 22, 19881. It houses the Museum of Vine and Wine of Jura.In the eighteenth century, the "Round Tower Vellefaux" is constructed as the family who owned the fief lords. It becomes part of the ramparts of the town of Arbois.In the early sixteenth century, Nicolas Perrenot de Granvelle (1484-1550) Chancellor, Minister of Justice, first counselor and French confidant of the Holy Roman Emperor Charles V, bought the castle of William Velfaux. He then build the main building. In the late sixteenth century, the castle becomes the property of the family Pécauld, officers of the Duke of Burgundy. After 1678, after the conquest of Franche-Comté by Louis XIV, William Pécauld buys the office of Governor of Arbois. The castle remains in Pécauld family until the French Revolution where it is sold as national property. In 1829 the castle was bought at a wine merchant in the town of Arbois. Pécauld the castle was a rectory and a school for boys, but its state of disrepair forced the town of Arbois to build a new school. In 1993, the castle was restored and houses the Museum of the vine and wine of the Jura and the Interprofessional Committee of Jura wines.

How To Get To Château Pécauld (Map):