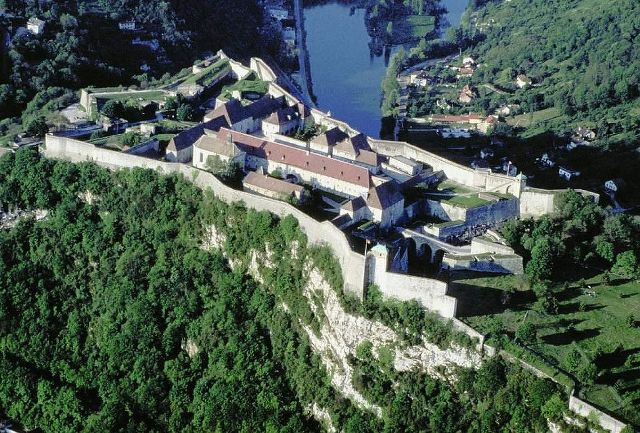 Location: Besançon, in the Doubs departement of France (Franche-Comté Region).
Built: 17th century.
Condition: In good condition.
Ownership / Access: Privately owned.
Notes: Citadelle de Besançon is a fortress overlooking the city of Besançon (Doubs), Burgundy, Franche-Comté. It is a masterpiece of Sébastien Le Prestre de Vauban (1633-1707), military engineer of King Louis XIV. It is for this reason a site classified 1924, classified as historical monuments by three orders of 1942 and 1944, and registered sinc.e 7 July 2008 on the UNESCO List of World Heritage in the major sites of the Network Vauban comprising twelve sites representative of the architectural genius of Vauban. The first stone of the citadel was raised at Mont Saint-Étienne 29 September 1668 when the city is in possession of the Spanish Crown. The Treaty of Nijmegen, signed August 10, 1678, definitively links the city and its region to kingdom of France: Louis XIV decided to make Besançon an essential ingredient of the Eastern defense system of France and entrusted Vauban care to continue construction. The Besançon Citadel is today the symbol of the city and a hotbed of tourism Franc-Comtois, first paying monument in the region in terms of attendance every year with 200 000 to 300 000 visitors. In addition to its architectural historical context and its geographical location, it houses three labeled museums Museums of France: the Museum of the Resistance and Deportation, the Comtois Museum and the Museum which is divided into five areas: the Zoo, the Aquarium, Insectarium, noctarium and the course of evolution. catering spaces and shop are on the site.The building extends over twelve hectares on a site whose strategic importance has existed since 58 BC. BC by Julius Caesar. The Besançon Citadel has been built on Saint-Etienne, one of the hills that form the natural protection of the capital of the Franche-Comté with Bregille, Chaudanne, Rosemont ... It overlooks over 100 m Old Town and therefore offers a grand view of Besançon and its surroundings. The city is located in a loop formed by a natural meander of the Doubs; the rocky outcrop on which stands the farm citadel somehow the loop of the Doubs and encircles the historic city center.