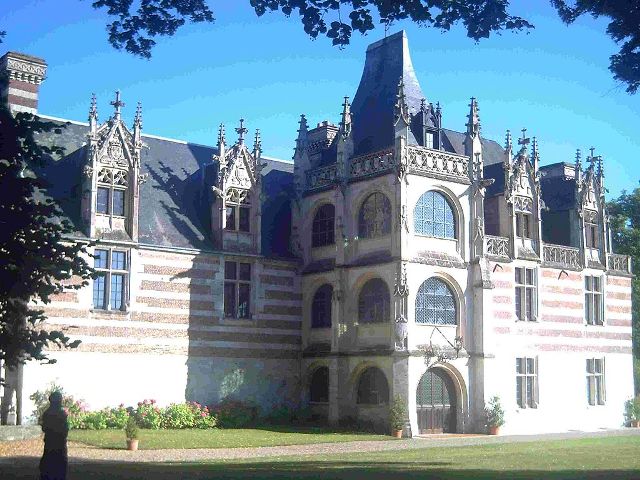 Location: Saint-Maurice-d'Ételan, in the Seine-Maritime departement of France (Haute-Normandie Region).
Built: 15th century.
Condition: In good condition.
Ownership / Access: Privately owned.
ISMH Reference Number: PA00101038
Notes: Château d'Ételan is a castle of the fifteenth century (1494) Gothic style located in Saint-Maurice-d'Ételan in Seine-Maritime. It is the subject of a registration as a historic monument since April 16, 1941.This may be a motte or a primitive castle which gave its name to the current monument, then to the village of Saint-Maurice, unless it be the reverse. Saint-Maurice-d'Etelan is cited as the Esteilant shaped 1050-663. It recognizes the Germanic element and Norse land in the sense of "field", attested also in Normandy and another element which could be the Old English stēġili "steep, steep." Toponyme typical old English, contemporary to the installation of Anglo-Scandinavian farmers in the tenth century in Normandy. Homonymous with Etelan in Catz (Manche). A sealed marble plaque in the office of Ételan retraces the list of domain owners since 1383. It was in 1494 that Louis Picart, bailiff of Troyes and the Tournai, friend and chamberlain of King Louis XII, he accompanied in Italy, began construction of the current castle. His granddaughter, Charlotte Esquetot, wife of Charles Cossé, Marshal of Brissac. In August 1563, it receives Ételan Catherine de Medici, then regent and the young king Charles IX coming to resume Le Havre to the English (27 July 1563). This is the castle Ételan the Regent, August 4, 1563, on the advice of Michel de L'Hospital, decided to proclaim, with a year in advance, the majority of the King. At Ételan she had prepared and sign and seal the "King of the majority of Letters." The castle is the property of the marshals of Brissac until 1621, when he passes by marriage to the family of Epinay Saint-Luc, who will sell it in 1714 to Charles Henault. His son, Jean-Francois Henault, Chairman of the Parliament of Paris and Superintendent of the House of Queen Marie Leszczynska, will receive his father. President Henault, famous historian, friend of Voltaire and the Philosophers, bequeathed it in 1770 to his nephew, Earl of Jonzac. From 1774, the castle was successively owned by Belhomme families Glatigny, Deshommets Martainville, Deschamps Boishébert, DESGENETAIS, Castelbajac and Charbonnière. Chronic or legend tells us that these people have stayed or went to Ételan: Louis XI (6 June and 13 July 1475), Francis I (during the construction of Havre de Grace), Catherine de Medici and Charles IX in the company of the future Henry III, Henry IV, Margaret of Valois and Michel de l'Hospital (August 1563). Voltaire (1723-1724). André Caplet, composer Grand Prix de Rome in 1901, and will stay there often are completed including its celebrated Mass for three voices. It was ravaged by a major fire in November 1940 caused accidentally by a horse company invasion of German troops who occupied the castle. It was requisitioned in 1943 to accommodate sixty Havre children bombed by Allied aircraft. After more than thirty years of restoration work, the castle and the chapel have regained their former splendor in 1994 for the 500th anniversary of its construction. Three multi-lime trees in the park were classified "remarkable trees" in 2010.

How To Get To Château d'Ételan (Map):