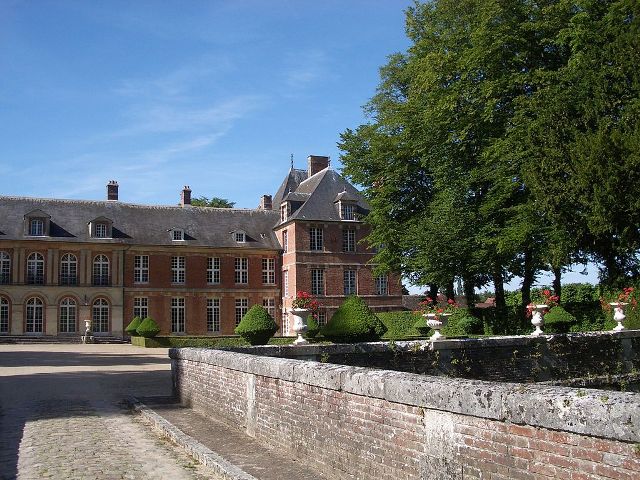 Location: Heudicourt, in the Eure departement of France (Haute-Normandie Region).
Built: 17th-19th century.
Condition: In good condition.
Ownership / Access: Privately owned.
ISMH Reference Number: PA00099452
Notes: Château d'Heudicourt in the town of Heudicourt, in the department of Eure in Normandy. The castle (including the courtyard, moat and gardens) is the subject of a classification as historical monuments since October 17, 1966.After the death of Michel Sublet, in 1665, his son named Michel also succeeded as owner of the castle. He married in 1666 Good Pons, niece of Marshal d'Albret, intimate friend of Madame de Maintenon. A table of Mignard, held at the castle, represents the whole. The property then fell to the son of Michel Sublet, Auguste Pons, and then to the daughter of this one, Madame de Belzunce. The Revolution made it a prison, and in 1798, Madame de Belzunce gave the castle to four Parisian notables. She died in Gournay-en-Bray in 1803. A year later, the four owners sold the property in Martin-Roch-Xavier Esteve, who was Treasurer of the Government, and came from the Languedoc. He undertook the restoration of the castle under the moat and entrance bridge, and in front flush the side wings that were ruined. He also added a new façade in classical style stone building in the center. Martin Esteve who was promoted to General Treasurer of the Crown was made Count of the Empire in 1809 by Napoleon. But in 1811, after a quarrel with the Emperor, he resigned and retired to his land of Heudicourt.The Esteve family is currently still own the domain.