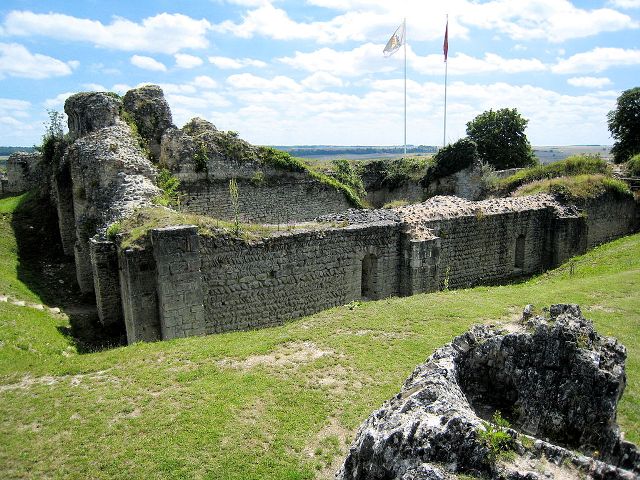 Location: Ivry-la-Bataille, in the Eure departement of France (Haute-Normandie Region).
Built: 10th century.
Condition: Ruins.
Ownership / Access: Owned by the Town.
ISMH Reference Number: PA00099460
Notes: Château d'Ivry-la-Bataille built in the town of Ivry-la-Bataille, in the southeast of the Eure, was a military fortress and residential construction of which begins at the end of tenth century. It was completely destroyed in 1424. Its ruins have been excavated and are now visited.Begun about 960 (this date is not confirmed yet), the original building was a quadrilateral walls with buttresses 32 meters to 25. This home-keep, or lecture hall, was on at least two levels and included a small chapel called Saint-Ursin. At the base of the walls with a thickness of 3 meters, one notices a unit-edge-of poisson2 characteristic Carolingian constructions as well as linking job bricks on some items including a buttress. This impressive set is due, according to legend, the architect Lanfred (or lanfroi), which was subsequently executed by Alberède, the first wife of Count Raoul. The keep rises around 1000 and is the time for one of the first jobs of the stone; feudal castles being far from wood. Today remains only the first level, it is the oldest medieval building Normandy stone. Récentes of studies suggest that the castle would have been the model for the Tower of London (circa 1070). A vast enclosure, less defended, extends south of the keep up the yard.