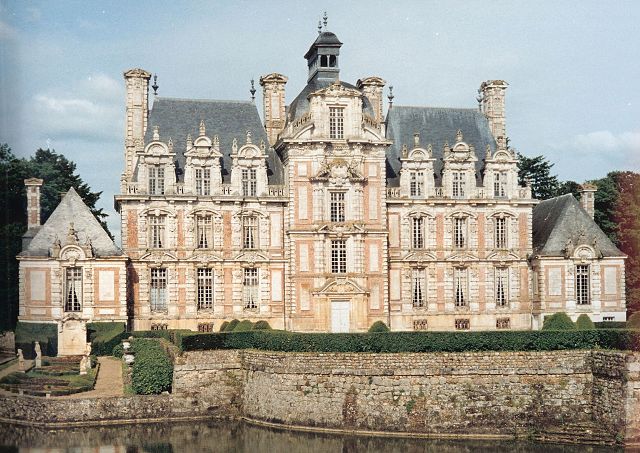 Location: Beaumesnil, in the Eure departement of France (Haute-Normandie Region).
Built: 1633-1640.
Condition: In good condition.
Ownership / Access: Private property.
ISMH Reference Number: PA00099323
Notes: Château de Beaumesnil is located in the town of Beaumesnil department of Eure in Normandy. Part of the castle and the park is the subject of a classification as historical monuments since December 20, 1966, the rest of the castle is registered as historical monuments since May 8, 1926 and the rest of the park registered since February 5, 1997.The fortress erected in the eighteenth century, it remains, for memory, a mound covered with a maze which materializes the site of a former talutée turn. Rare example of vintage Louis XIII chateau (mainly construction, led by architect Jean Gallard, is between 1633 and 1640), the current remains contemporary to the Medici fountain and Hotel de Sully, bears the imprint of the Renaissance graduate, but also finds the new common brand from Italy (Florentine style) and Holland. The materials used are brick and stone. Brick, cheap, was produced in large quantities in Normandy but to address potential manufacturing defects, it was customary to strengthen the most fragile parts with stone. west side, the main entrance is preceded by a bridge, forming a large courtyard terrace and staircase of steps ending x halfway between the basement and the first floor. From the park side, you cross another bridge leading to a double staircase leading directly onto the first floor. The set includes:a central front building topped by a lantern, symbol of power where two fires reported overnight around the site of the castle; a rectangular main building with three bays on either side of the front building, where were the apartments of the owners and the rooms reserved for VIP guests; two side pavilions added in the eighteenth century, where lived those of lesser importance; all topped with a high slate roof.

How To Get To Château de Beaumesnil (Map):