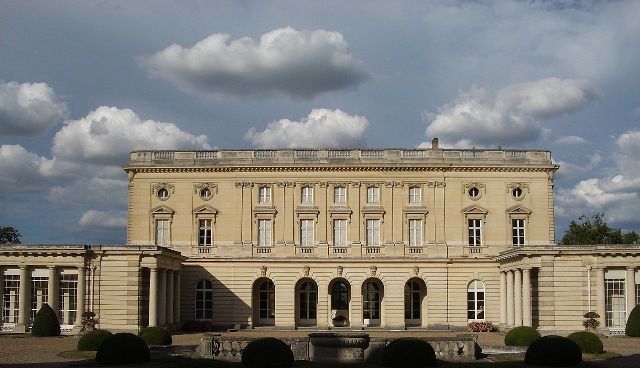 Location: Vernon, in the Eure departement of France (Haute-Normandie Region).
Built: 1675.
Condition: In good condition.
Ownership / Access: Privately owned.
ISMH Reference Number: PA00099617
Notes: Château de Bizy is a castle located in Vernon in the Eure department of Normandy.The Lordship of Bizy is the nineteenth century "the privilege" of Jean de Tilly, sire of Blaru, following her marriage in 1364 to Margaret of Sacquainville. The Lordship of Bizy (Vernon) adjoins that of Blaru on the border between the current departments of Eure and Yvelines.The estate passes to the Jubert family, on 8 October 1596 and receives the King Henry IV. In 1675, Michel-André Jubert Bouville, state councilor and steward of Orleans, having obtained the election of the lordship marquisate, is constructing an elongated plan slated castle, flanked by two pavilions higher and preceded by two stairways called "horseshoe". By exchange of its land in Belle-Isle against the counties of Gisors, Les Andelys and Vernon Duke of Belle Isle (1684-1761), grand-son of Fouquet comes into possession of the castle in 1721. He expanded the field and realize considerable work worth at Bizy the nickname "Norman Versailles". Envisaging the reconstruction of the castle, the Duke created a forecourt terrace and a half-moon and the Avenue of the Capuchins, which connects the castle to the Seine, he arrange all the small park and hunting park and entrusts the architect Contant d'Ivry care of building, between 1741 and 1743 the yard with stables for horses sixty inspired by Versailles and the foot bath, basin for washing the horses' hooves. September 21, 1749 the duke, who in 1741 received a marshal's baton in France, welcomes Bizy King Louis XV accompanied by Madame de Pompadour. On the death of Marshal Belle Isle in 1761, his estate back to the king who, in 1762, the exchange against the sovereign principality of Dombes the Count d'Eu, son of the Duke of Maine, legitimized bastard of Louis XIV and Madame de Montespan. The count has the financial means to maintain the area but did not perform any new construction. Single and childless, he bequeathed the castle to his cousin the Duke of Penthièvre, son of the Count of Toulouse and one of the largest landowners in the kingdom. Owner Bizy in the death of Count d'Eu in 1775, the Duke of Penthièvre made frequent trips from 1783, when he was forced to yield to Louis XVI castle of Rambouillet, then he made in 1792 his main residence, where he settled with his daughter the Duchess of Orleans. On the eve of the Terror, he died in his bed in March 1793, said his staff and the local population.

How To Get To Château de Bizy (Map):