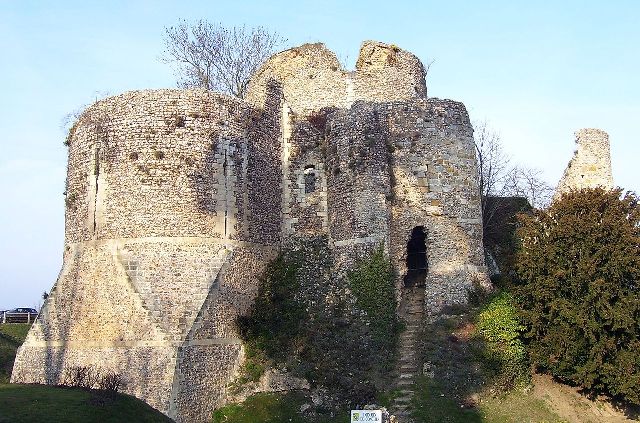 Location: Conches-en-Ouche, in the Eure departement of France (Haute-Normandie Region).
Built: 11th century.
Condition: In good condition.
Ownership / Access: Privately owned.
Notes: Château de Conches-en-Ouche is a medieval castle located in the eponymous town in the Eure department of Normandy, dismantled in the sixteenth century.The start of construction dates back to 1034 and Roger I of Tosny. The lords of Tosny, whose origin remains obscure, inherit this feud then called Castellio in medieval Latin (Castillon in northern Norman and Occitan in southern Chastillon Norman and Old French, from where Châtillon). The castle is taken by Philip Augustus in 1199. It gives the in 1202 to his cousin Robert Courtenay. The castle was enlarged, the flanking towers were added to the outer enclosure.Conches-en-Ouche was a fief of Robert d'Artois, the man who is involved with the English in the Hundred Years War, which Maurice Druon in hishistorical saga Cursed Kings, is the trigger for conflict. The city suffered the ride of Henry of Lancaster in 1356.In 1354 the Treaty of Mantes, city and fortress are given by the King of France Jean II King Charles II of Navarre said the Bad, with Beaumont-le-Roger county, the Viscount de Pont-Audemer and Clos du Cotentin4. Charles II entrusted the town of Thane Buch John Grailly, which entrusts to turn to his uncle Archambaud. Claiming that the Thane had happened to the English, Bertrand du Guesclin besieged Goms in 1371. An agreement was signed February 4, 1371 and Navarre evacuate the city. The surrender seven years before the conquest of the King of Navarre's assets by Charles V in Conches is not to be destroyed like other fortresses of Charles II Navarre.Henry V of England seized the castle in 1420. Goms is taken by the French in 14403 and the following year by the English. They will be driven by Robert of flocked, bailiff of Evreux.In 1591, the castle is a refuge for members of the League. Remaining a potential fulcrum for the enemies of the monarchy, it is dismantled afterwards.