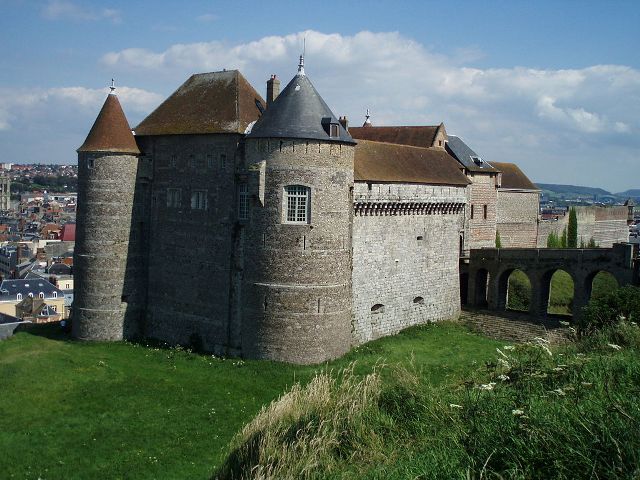 Location: Dieppe, in the Seine-Maritime departement of France (Haute-Normandie Region).
Built: 14th-15th century.
Condition: In good condition.
Ownership / Access: Owned by the Town.
ISMH Reference Number: PA00100620
Notes: Château de Dieppe is a castle located on the seafront in the Normandy town of Dieppe, now a museum.It is built to defend the city by monitoring the Channel coast, it is built on the western edge of the cliff about thirty meters above the water level. The exact origin of the castle lends to confusion, it was certainly built on the site of the first castle built by Henry II and Richard the Lion Heart and then destroyed by Philippe Auguste in 1195.What is certain today is that the oldest vestige is the keep or west tower, whose construction is set around 1360, when it built a fortified wall around the city, threatened by the Flemish and English.In 1435, after having released the English occupation, Charles Desmarets gets permission to expand instead. Three more towers are built so while a square tower, equipped with a drawbridge was built to protect the entrance. The set is connected to the city. In the first half of the sixteenth century, a defensive building campaign is imposed by the progress of artillery. A barbican was built to protect the south-east façade and a new tower, detached at the foot of the castle and connected to the rest of the fortifications. At the end of the sixteenth century is a square tower built in the south while the chamber is extended in this direction. She joined the Saint-Rémy tower. Built as a fortress capable of resisting the onslaught and seats, the castle is changing the seventeenth century. Progress in arms give him roles residence and barracks. then there is drilled wide and tall windows, roofs pepperpot cover the terraces of the towers. The castle became a place of residence and reception. The court is an illustration by taking a ceremonial function. On the southwest part of the castle, a fire was built in 1630 on the site of the current temporary exhibition hall of the museum.

How To Get To Château de Dieppe (Map):