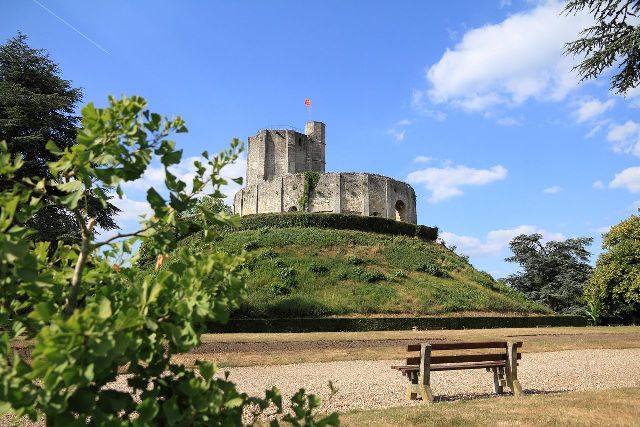 Location: Gisors, in the Eure departement of France (Haute-Normandie Region).
Built: 11th-12th century.
Condition: In good condition.
Ownership / Access: Owned by the Town.
ISMH Reference Number: PA00099430
Notes: Château de Gisors is an ancient castle of the eleventh and twelfth centuries the remains of which stand in the town of Gisors in the department of Eure and Normandy region.The castle is the subject of a classification as historical monuments by the 1862 list.The origins of this fortress date back to the second half of the eleventh century. A motte was built in 1097 by Robert of Bellême, by order of the King of England William II Rufus (1087-1100) , Duchy of Normandy regent. This is complemented a year later by a wooden tower, probably wearing a palissade. In 1113, this fortified site overlooking the Epte Valley, hosts a meeting between sovereign Louis VI of France and Henry I of England. He knows his first seat in 1120, during the rebellion of the Norman lords against the English tutelage. The stronghold defended by the governor "Robert Chandos" had good hold on, this serious warning lead the English sovereign to judge safer to rethink the fortifications, which will be taken from 1123. This first reconstruction campaign will see the addition a stone dungeon octagonal size, surrounded by a rampart wholesale unit (the low-enclosure) . Henry I disappeared in 1135, leaving no male heir. His daughter Empress Matilda, widow of the German Emperor Henry V, aside from the throne, marries a noble Angevin, Geoffrey Plantagenet, who becomes Duke of Normandy, while at the same time, the throne of England is told Stephen of Blois. The death of this one in 1154 without a male heir, is the son of Geoffrey the new king of England, and a new era: that of the Plantagenets.

How To Get To Château de Gisors (Map):